Robert Garcia: Rubio will beat Golovkin because of his Mexican blood running through his veins 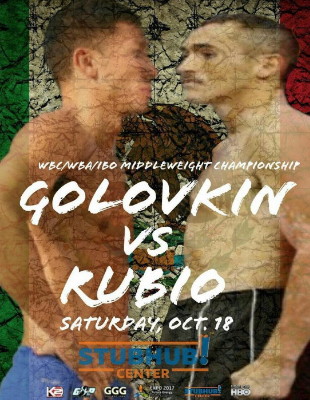 By Dan Ambrose: Marco Antonio Rubio’s trainer Robert Garcia has it all figured out why he feels his fighter will be able to conquer the odds this month and defeat WBA middleweight champion Gennady Golovkin (30-0, 27 KOs) on October 18th at the StubHub Center in Carson, California.

Golovkin is a pretty talented fighter and it’s hard to see him losing to Rubio, who isn’t considered to be the top fighter in the division. Golovkin rates Rubio over the likes of Sam Soliman, Daniel Jacobs, Peter Quillin and Miguel Cotto, but not too many other people do.

It’s not surprising that Golovkin is talking up Rubio because he’s fighting him now. It makes him look a lot better if he beats Rubio if more boxing fans think he’s the best fighter at 160 other than himself.

Rubio will need to take a lot of heavy shots and come back with some really big punches of his own if he’s to beat Golovkin. Rubio took heavy punishment for the first 5 rounds in his victory over David Lemieux before coming on and scoring a stoppage win in the 7th round, but that was against a near novice with little amateur experience and poor conditioning.

Lemieux ran out of gas after 5, but if he hadn’t run out of gas then he eventually would have knocked Rubio out. There was no way that Rubio was going to be able to take a full 12 rounds of heavy shots by Lemieux if the fighter hadn’t tired out.