Golovkin to be at ringside for Murray vs. Spada fight on Saturday 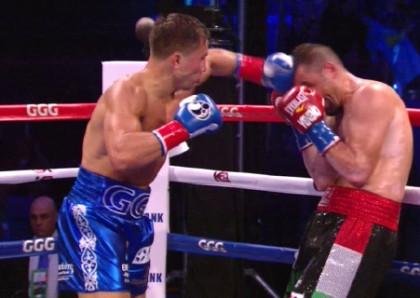 The chances are that Golovkin could fight the winner of that fight next February. However, it’s still not certain he’ll fight Murray if he wins. Murray is talking about a win over Spada would make him eligible to fight any of the world champions, not just Golovkin.

The fact that Murray isn’t just talking about a Golovkin fight suggests that he could easily go in another direction if one of the other champions will give him a shot.

Murray sees himself as the No.2 middleweight in the division right now below Golovkin. Murray was beaten in the past by Sergio Martinez last year, and he fought to a 12 round draw against Felix Sturm in 2011. I saw both fights and I had Murray losing them both, because he was hit far too many times by clean shots by both of these guys.

Murray’s fight against Martinez gave him the best chance to win, because Martinez suffered a broken hand early in the fight, and he came into the fight with a torn up right knee. Even with those problems, Martinez was able to outwork and outland Murray. If Murray wants to blame anyone for his loss to Martinez, he needs to look in the mirror, because he wasted too much time trying not to get hit by hiding behind his high guard for the entire fight.

Murray has a lot to prove in the Spada fight, because this is a guy who was recently knocked out in the 10th round by Golovkin victim Marco Antonio Rubio in April of 2014. Golovkin knocked Rubio out in 2 rounds last Saturday. As such, if Murray has to struggle to defeat Spada or if he has to go the full distance, it’s going to look bad.

Murray said “there are some big fights out there” – but must first deal with Spada.”
You did notice that Murray didn’t specifically name Golovkin as the guy that he wants to fight next, didn’t you? That tells me that Murray could very well choose to skip the title shot against Golovkin and look in another direction. Golovkin will have wasted his trip to Monte Carlo if Murray chooses to fight someone else.

Spada is worried that Murray will clam up with his clam-shell guard and just look to cover up all night long. He wants to brawl with Murray so that they can entertain the fans. “I hope he will fight. I want to give the fans a good show,” Spada said.

« Groves’ next fight to be announced in 24 hours, could fight on Bellew-Cleverly 2 card

Saunders in tough against Eubank Jr »