Saunders in tough against Eubank Jr 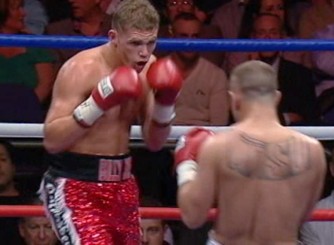 By Daven: Earlier today, a watershed moment transpired, it marked the first direct verbal spar between Billy Joe Saunders and Chris Eubank Jr. It happened at the Talk-sport Studio. In essence Saunders began frantically berating his opponent, without allowing a retort, he aggressively demanded that Chris comply with his lurid stipulation that the loser pay out £100,000.

Why does a professional fighter feel the need to make such a crude request? Billy is being handsomely paid to fight and he should focus on that alone. However, rather than rising to the bait, Chris sensibly laughed off the ignorant remarks and referred to Billy as a “kid” who is out of his depth.

In recent interviews featuring Billy, he comes across desperate as well as totally unhinged. So much so that he stated to thousands of people via IFL TV, that he’ll retire from the sport should he lose to his adversary next month. Consequently placing himself under monumental pressure. Now, he must not only defeat Eubank Jr, he must do it convincingly. Failing to do so will lead his supporters to simply abandon him. If anybody requires evidence that this will happen, I urge you to examine the case of Froch-Groves I. Although Carl Froch emerged victorious, fans had believed Froch’s pre-fight claim that Groves would be destroyed. Subsequently this did not materialize, and the Cobra for the first time in his career lost substantial credibility. Similarly Saunders has made the point of undermining Chris’ skills, calling him “garbage” among other things to the point that nothing less than a comprehensive defeat will satisfy fans and critics alike. Bearing in mind Saunders gasses out badly last time out, he ought to be reserving criticism of other boxers for now at least.

Looking at Eubank’s strengths in more detail, it’s evident to me, that he will cause Saunders major issues. The reality is, Saunders has never faced anybody who’s possessed half the hand speed of the Brighton man nor has Billy fought any individual with so much natural ability or raw athleticism. Eubank can potentially embarrass his nemesis by not only hitting and moving but taunting him like he’s done to the entirety of his seventeen victims. The so-called experts in the field of British boxing have failed to acknowledge that Saunders lacks speed and in-ring intelligence; contrastingly Christopher Eubank Jr is highly proficient in both of these areas meaning he holds the balance of power. Of course, he is seriously untested, then again maybe Saunders’ achievements have actually been elevated to an exaggerated level. If one subscribes to this line of thinking, Eubank Jr immediately becomes the favorite to win on November 19.

In conclusion one sees no bright future for Saunders following his encounter with Eubank Jr. Even if he wins, it will not be in impressive fashion. My reasoning for this is his lack of knock out power, he couldn’t even stop the mediocre Gary O’Sullivan! How then, one winders will he be able to knock out an elusive Eubank Jr? Being as bold as I am, one predicts a Eubank Jr victory, we forget he’s only fought professionally two times less than Saunders. Moreover one has not seen a British fighter with so much swagger since the days of Hamed. Come November 19, Saunders’ dream of winning a world title will cease and Eubank’s dream will be a step closer to reality.

« Golovkin to be at ringside for Murray vs. Spada fight on Saturday