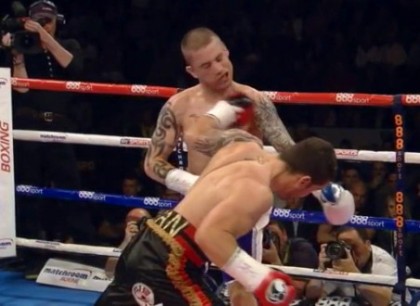 What’s interesting about the Burns-Gonzalez fight is that Burns isn’t actually fighting a light welterweight.

Burns, 31, hast lost his last two fights to Dejan Zlaticanin and Terence Crawford. You can make an argument that Burns has lost his last 3 fights because his 12 round draw against Raymundo Beltran last year in September was highly questionable. A lot of boxing fans had Burns losing that fight by 11 rounds to 1. Burns’ last fight against Zlaticanin was supposed to have been a tune-up bout, but Zlaticanin surprised a lot of fans by soundly beating Burns and knocking him down in the process.

Burns blames his difficulties in the ring to him having to struggle to make weight at light weight. However, Burns also looked poor in his fights against Jose Gonzalez and Michael Katsidis, and those fights came well before his problems with making weight.

“I believe that the move up in weight will really benefit me,” Burns said. “The lightweight limit was proving tougher to make in y last few fights so that’s now behind me.”

The weight class will be at 140, but Burns is facing a lightweight in Gonzalez rather than an actual 140 pounder. It kind of defeats the whole purpose when a fighter moves up in weight but then drags a smaller guy up with him from the division he’s leaving. You see this kind of thing and over again, and it just doesn’t make any sense at all.

Burns might do well in his first fight at 140, since he’s fighting a 2nd tier fighter and not a top 15 ranked contender. But once Burns faces a quality fighter, then we could see him having the same problems that he’s been having in his last several fights.

Gonzalez and Burns both have fought Paulus Moses in the past. Gonzalez was knocked out by him last year by a 7th round knockout, whereas Burns clinched his way to a 12 round decision over Moses in 2012 in an ugly to watch to fight.

Burns should in theory be able to beat Gonzalez, because this guy is after all a 2nd tier fighter guy, but it’s hard to say for sure whether Burns will be able to do that. His game has really deteriorated since the beating that Beltran gave him last year, and I have a feeling that he’s going to struggle even worse at 140 than he did at 135. Burns doesn’t have the power to be fighting in the light welterweight division, and that means he’s going to need to take a lot of punishment in his fights to try and win by decision.

« Pacquiao: Mayweather is all talk, Maidana beat him

Dirrell: Groves will need to come to the U.S if he wants to fight for my title »