Dirrell: Groves will need to come to the U.S if he wants to fight for my title 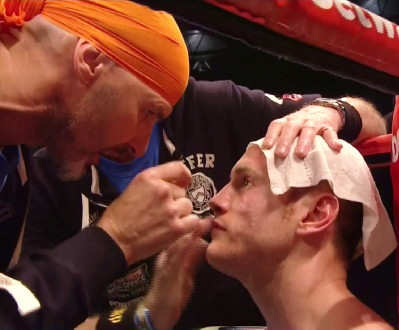 By Scott Gilfoid: WBC super middleweight champion Anthony Dirrell still hasn’t come to terms with the fact that he could very well be soon defending his title against George Groves (19-2, 15 KOs), possibly in December of this year if Groves defeats #3 WBC Christopher Rebrasse (22-2-3, 6 KOs) this Saturday night in their WBC super middleweight title eliminator at the Wembley Arena in London, UK.

Dirrell is unhappy that the WBC has given Groves an immediate chance to put himself in line to fight for a world title after consecutive losses to IBF/WBA super middleweight champion Carl Froch.

Dirrell also doesn’t see how or why the WBC ranked little known Rebrasse so highly by their organization, given that Rebrasse has only beaten one contender during his entire career. Rebrasse kind of came out of nowhere in getting a high top 5 ranking off of a win over Mouhamed Ali Ndiaye last March. Dirrell sees Rebrasse as not being a quality fighter and certainly not being anywhere near good enough to be fighting in an eliminator bout for his WBC super middleweight title.

“There’s no way I’ll be going to the UK,” Dirrell said to the Dailymail.co.uk. “Everyone knows what happens over there. If they make Groves the No.1 contender then he’s going to have to come here and try and beat me, and he won’t do it. He wants to fight with me? He just lost twice to Froch. Tell him he needs to fight someone in the top 10.”

What’s likely to happen on Saturday is Groves will probably KO Rebrasse early in the fight to earn the WBC mandatory spot to fight Dirrell. From there, Groves’ powerhouse promoters at Sauerland Event will likely work hard to get the Groves-Dirrell fight to be staged in the UK. I can see this easily going to purse bids with Sauerland likely out-bidding Golden Boy Promotions to have the fight staged in the UK.

Dirrell would then find himself in a position where he’ll either need to vacate his WBC title, which he obviously isn’t going to do, or stomach the fact that he’s going to need to go to the UK to fight Groves in front of a huge pro-Groves crowd at wherever the fight is staged. On the plus side, Dirrell will get a bigger payday than he would if the fight were to be staged in the United States due to the huge gate from the UK audience.

On the negative side, Dirrell will need to put his faith in the judges and hope that he doesn’t lose a controversial decision like what we saw with his brother Andre Dirrell when he came to the UK in 2009 and lost to Carl Froch by a questionable decision in Nottingham.

Dirrell would have a big advantage over Groves if that fight gets made because with his power, speed and stamina advantage, Dirrell is going to have an excellent chance of knocking Groves out. Groves has already shown to have a shaky chin in his past fights against Froch. All Dirrell would need to do is to keep testing Groves’ chin until he finally drops for the 10 count.

I’d say the chances of Groves getting the fight against Dirrell in the UK are fairly high because Groves’ promoters will likely pay big money to get the fight to take place over there. Dirrell will find himself fighting Groves whether he wants to or not. But it’s really not that big of a deal because with Dirrell’s power, he’ll likely take care of Groves without any problems at some point in the fight.