Pacquiao: Mayweather is all talk, Maidana beat him 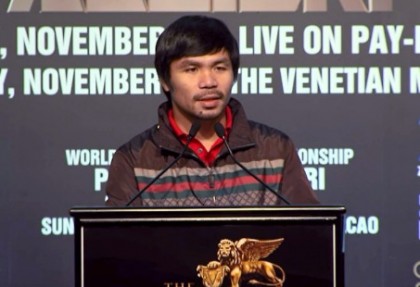 By Raj Parmar: Boxing superstar Manny Pacquiao seems to be growing increasingly frustrated with pound for pound king Floyd Mayweather. Talks of a super-fight between these two dominant powers in boxing have been ongoing for a few years now with the fight never coming to fruition.

It seems like Manny has hit his boiling point with regards to a fight with Floyd and appears very eager to step in the ring with Mayweather.

“He’s all talk. Until now he has not yet agreed to fight me. Instead of blabbing, he should face me atop the ring,” Pacquiao told AFP.com, “I’m tired of his alibis. If he really wants to fight me, he knows how to reach me. We can fight anytime, anywhere.”

Fans and media figures of the sport have gone back and forth with each other regarding who is to blame for the fight not occurring as yet. Some have argued that Floyd does not want to danger his undefeated record by fighting a fighter with the unique speed/power combination the Pacquiao presents, while others feel that Manny botched the fight from happening by refusing Mayweather’s drug testing demands during earlier negotiations.

Whatever the case may be for the event not occurring, Manny feels the ball is in Floyd’s court and there is nothing from his end that is stopping the fight from going forward. He was not impressed with Floyd’s latest performance which was a decisive unanimous decision against the heavy hitting Marcos Maidana this past weekend. Pacquiao actually feels Mayweather lost the fight and took much more punishment than Maidana did.

“To me, Maidana won that fight. Mayweather’s face and lips were swelling compared to Maidana’s unblemished face,” Pacquiao said.

While there is no doubt that Floyd won the rematch with Maidana as he controlled nearly all the rounds with his movement, counterpunching and potshots; Manny clearly is agitated by Floyd’s persona and is getting further irritated as more and more time goes by without the fight against Mayweather getting closer to becoming a reality.

*Follow @Raj_Parmar_11 on twitter for analysis on recent boxing news and events; with detailed articles posted to boxingnews24.com

« Lomachenko, Vargas and Shiming on Pacquiao vs. Algieri card on 11/22