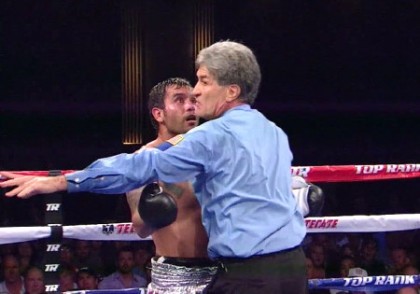 By Dan Ambrose: In a fight that was filled by fouling by both fighters, Brandon Rios (32-2, 23 KOs) defeated Diego Chaves (23-2, 19 KOs) by a 9th round disqualification tonight at the Cosmopolitan of Las Vegas, in Las Vegas, Nevada, USA. The fight was halted by referee Vic Drakulich in the 9th round following a head lock. Rios said he was pocked in the eye by Chaves.

Drakulich won the fight for Rios, because he was on his to his third consecutive defeat if not for the ref disqualifying Chaves. At the time of the stoppage, Chaves was ahead on the judges’ scorecards by a 75-74 and 75-74, while the third judge had it 75-74 for Rios. If not for Drakulich taking two points away from Chaves, Rios would have been trailing on all three judges’ scorecards. Rios should be thanking Drakulich for saving his career tonight.

What was interesting about this fight is that Rios was sticking his head into the face of Chaves each time he would clinch with him. Rios was shoving his head directly into the face. Drakulitch warned Rios repeatedly for this but never took points away. That was the interesting part. Rios fought like a dirty journeyman tonight rather than a professional, and just seemed like wanted to turn it into a street fight without any rules. But was sad about Rios was the way he complained to the referee and acted like he was innocent.

Drakulich took two points away from Chaves. In the 3rd, Chaves was docked a point for clinching after having been given just one warning by Drakulich. In the 8th, Chaves lost a point for lacing.

“It was a disgrace what the referee did to me. I want to fight Rios again but with a different referee,” said Chaves.

As far as the fight goes, Chaves was doing the better work while on the outside and appeared to be on top when Drakulich stopped the bout in the 9th. When Rios would come in close, he was able to land some good shots to the body and the head. But Chaves did a good job of nullifying his attacks by clinching and moving. Unfortunately, when they could clinch, Rios would stick his head directly into the face of Chaves like a bull, and Drakulich failed to stop Rios from repeatedly doing this tonight. For every clinch that Chaves did, Rios stuck his head directly into his face. I’ve never seen a fighter do that for entire fight and get away with it.

Drakulich didn’t take points away from Amir Khan for clinching in his fight against Zab Judah, and he clinched far more than Chaves did tonight. You have to wonder why Drakulich suddenly decided that he was going to take such a hard stance on clinching, and yet let Rios get away with ramming into the face of Chaves each time he would clinch. You’re not supposed to stick the crown of your head into the face of your opponent when they clinch, and that’s what Rios was doing all night.

All in all, Drakulich ruined the night by being overactive and not stopping the Rios from using his head. Chaves shouldn’t have lost a point for holding in the third round because he had received just one warning prior to that. When Chaves shoved Rios with his gloves in the 8th, he did it because Rios was sticking the crown of his head directly into his face during a clinch. Instead of Rios losing a point, Drakulich took a point away from Chaves.

Sometimes referees want to insert themselves into the equation and we saw that tonight with Drakulich. He made himself the story instead of the fighters. They were both battling him tonight and his poor refereeing.

After the fight, Rios’ trainer Robert Garcia said he taught Rios that when he’s being clinched, he should stick his head into the chest of his opponent. Unfortunately, that’s not what Rios was doing tonight. he was sticking his head into the face of Chaves, and that was so blatant.

Vargas staggered Novikov with a left hand in the 5th. That was pretty much the highlight round of the fight, because the other rounds were even with both guys firing shots back and forth.

Novkikov appeared to have suffered a broken nose in the fight. He also was cut over his left eye.

Vargas was lucky that Top Rank picked out a guy without much power to speak of in Novikov, because if this had been someone with some actual power like Lucas Matthysse, Vargas would have been in for a world of hurt tonight. A high work rate fighter like Viktor Postol would give Vargas a lot of problems as well. Vargas doesn’t have big enough power for him to compete against the better guys at 140. It’s going to be difficult for Top Rank to keep Vargas as the WBA champion for much longer unless they match him very, very carefully because he’s beatable.

« Kovalev destroys Caparello in 2nd round