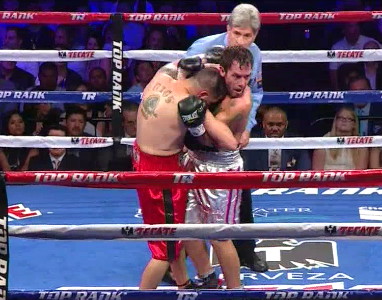 Rios was unable to attend the post-fight press conference due to an injured shoulder or collarbone, as well as eye injury.

“Rios is dizzy and may have a separated shoulder or broken collarbone in addition to the eye injury, per his manager Mickey Felix,” Kevin Iole of Yahoo Sports said. “Bob Arum just said Rios isn’t coming to the press conference. He is concerned he has a corneal abrasion.”

Rios may have injured his shoulder when Chaves put Rios into a head lock and fell down on the canvas with him in the 8th round. Rios took a while before he got back to his feet after the incident.

The final judge stats were as follows:

It was not a good performance from Rios, as he was on his way to losing the fight if not for the referee stopping the fight. Referee Vic Drakulich was single-handedly winning rounds for Rios by deducting points from Chaves in the 3rd and 8th for him holding, which he really wasn’t doing a lot of, and raking his glove over the face of Rios after being head-butted by him in the 8th.

From the 3rd round, Drakulich looked like he wasn’t going to put up with much from the two fighters. Ultimately though, Drakulich ignored the head-butting that Rios was doing every time that Chaves would initiate a clinch and instead focused on the rough stuff that Chaves was doing.

When Chaves would clinch, Rios would ram his head into his face. It was like clockwork as it happened every time that Chaves would clinch. I’ve never seen a fighter head-butt during every clinch before and get away with it until tonight. But what’s even more disturbing was the Chaves was the one that was disqualified instead of Rios.

It’s hard to see what Top Rank can do with Brandon Rios after a fight like this. They probably don’t know what the fan reaction to the fight is yet, but in the coming days they’re going to discover that fans saw Rios getting a gift victory tonight over Chaves. But ignoring the actual result of the fight, Top Rank is going to need to think about cashing out with Rios soon, because he showed tonight that he was in the process of losing to a fringe contender if not for Drakulich stepping in to save the day for him.

Rios is going to need to unlearn his head-butting habit quickly, because he’s not likely to get Drakulich for his next fight, and I don’t know of any referees, other than the one that worked tonight’s fight, that would allow a fighter to ram his head into his opponent’s face each time they initiated a clinch.

Hopkins irritated by Kellerman when questioned about Kovalev fight »