Chaves: I was impressed with the shots Rios could take; he was like a punching bag 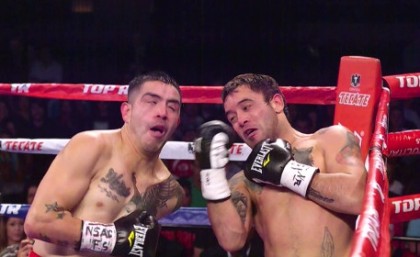 By Dan Ambrose: Diego Chaves (23-2, 19 KOs) came away from his loss to Brandon Rios (32-2-1, 23 KOs) last Saturday night with a certain element of respect for the fighter despite the strange ending of the fight at the Cosmopolitan of Las Vegas, in Las Vegas, Nevada, USA.

Chaves said after the fight that he admired the way that Rios was able to take his best shots during the fight and keep coming. He felt that Rios was like a punching bag with the way he was able to eat his punches. Chaves hit Rios with some tremendous shots in the fight that would have knocked out many welterweights in the division. But Rios, who weighed 159 pounds the night of the fight, took them all.

Chaves was disqualified in the 9th round for throwing an elbow during a head-lock. No one saw the elbow being thrown by Chaves, and it’s still unclear when referee Vic Drakulich observed Chaves throwing the elbow.

“I was impressed with how many punches he [Rios] could take,” Chaves said to esnewsreporting.com. “Rios was standing like a punching bag.”

Chaves was penalized twice by Drakulich and the point deductions kept Rios in the fight because without them, he would have been trailing by 3 points going into the 9th.

Chaves said that he believes he’ll be on more Top Rank cards in the future, and that he still wants a rematch. However, Rios’ promoter Bob Arum has said nothing about wanting to match Chaves back up with Rios. He’s going to look to put Rios in with either Mike Alvarado for a third fight between them or Ruslan Provodnikov next.

Chaves had his chance and he lost it by being disqualified by the phantom elbow that he supposedly threw.

“I still don’t understand the disqualification. I deserve a rematch,” Chaves said. “I’ve never been in with a fighter that dirty before. Rios is the one that made the fight dirty.”

What Chaves is referring to is how Rios was head-butting him each time he would clinch with him. Rios was able hitting him in the back of the head with rabbit punches throughout the fight. Chaves explained why he retaliated by lacing Rios in the 8th, saying that he’d just been head-butted by him and hit in the back of the head as well. He was angry that Drakulich had done nothing to stop the action to talk to Rios about those fouls, so he responded by shoving his glove into the face of Rios. Drakulich took a point away from Chaves at this point, but he didn’t take a point away from Rios for the head-butt and rabbit punch that started the incident.

Chaves is going to need to move his career along in a separate lane than Rios, because Arum isn’t showing any interest in letting him fight Rios again. He dodged a bullet this time with Drakulich disqualifying Chaves in a fight that Rios could very well have lost had there been a different referee working the fight. With a referee that policed rabbit punches, we likely would have seen Rios losing points in the early rounds and possibly disqualified for that if he failed to listen. But in this case, it was the opposite with Chaves being disqualified.