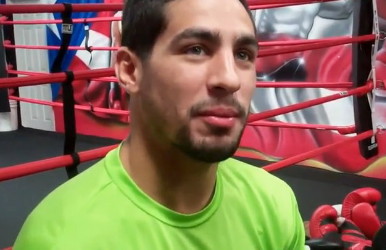 By Allan Fox: WBA/WBC light welterweight champion Danny Garcia (28-0, 16 KOs) will be in the ring this Saturday night against lightweight Rod Salka (19-3, 3 KOs) in a 142 pound catch-weight fight at the Barclays Center in Brooklyn, New York.

The fight was originally slated to have Garcia’s two titles on the line for an optional title defense. It appears that Garcia’s adviser Al Haymon made a miscalculation when he selected Salka for Rios to defend his titles against, because the backlash that it created led to the WBA and WBC deciding not to sanction the fight as a title defense.

Garcia says he doesn’t care that his titles aren’t going to be on the line, as he plans on moving up to 147. This is one of the reasons why he moved the weight from 140 to 142. He wants to ease his way into the welterweight division.

Salka isn’t the guy that you would think would be the proper step up fight for Garcia though, because he’s a lightweight. Garcia would have been better off dragging a welterweight down in weight to 142 to fight instead of having a light hitting lightweight, without a top 15 ranking, move up to 142 to fight him.

For casual boxing fans interested in just seeing two bodies in the ring throwing punches at each other, they’ll be more than happy to see Garcia fighting Salka on Saturday. It’ll be good cheap entertainment on regular Showtime instead of on pay-per-view. However, the hardcore boxing fans are disturbed by this match-up from a world champion like Danny Garcia.

You don’t see world champions nowadays facing non-top 15 ranked fighters from a division below them like Garcia is doing. He wants to be seen in the same light as guys like Floyd Mayweather Jr and Manny Pacquiao, but then he takes a fight against Rod Salka. That’s something that fans don’t quite understand. Garcia is distancing himself from the fight by saying he’s not the one that made the fight with Salka, it was his adviser. However, Garcia could have vetoed the choice and asked for another opponent, but he chose to agree to the fight.

« Chaves: I was impressed with the shots Rios could take; he was like a punching bag

Will Maidana’s weight loss help him against Mayweather? »