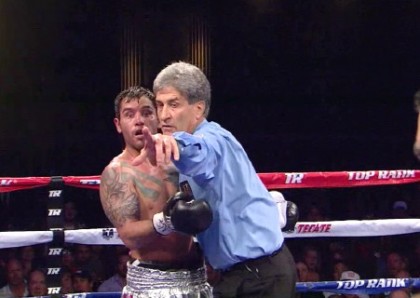 By Chris Williams: Top Rank promoter Bob Arum, the promoter for Brandon Rios (32-2-1, 23 KOs), says that visiting fighter Diego Chaves (23-2, 19 KOs) was disqualified last night by referee Vic Drakulich for having thrown an elbow before a head-lock in the 9th rather than for having allegedly gauged the eyes of Rios, which is what Rios was complaining about.

“It was an elbow that he was disqualified for and not a gauge of the eye,” Arum said at the post-fight press conference.

You naturally want to give Rios the benefit of the doubt about him having had his eye gauged during the head-lock in the 9th, even though it was impossible to see that it actually happened, but it’s hard to swallow that the fight was halted because of Chaves having elbowed Rios. Chaves didn’t throw an elbow. I watched the last found in slow motion and there was no elbow thrown by Chaves during the 9th.

It was a head-lock that he put Rios in. As soon as the referee Drakulich pulled the two fighters apart, Rios said “You mother-[expletive], hey, you better stop grabbing my eye.”

At that point Drakulich turned around and gave Chaves a long look and then waived off the fight. For Arum to be saying that Drakulich stopped the fight due to an elbow is very, very strange because there was absolutely no elbow thrown by Chaves. I guess you could call it a phantom elbow like with Muhammad Ali’s phantom knockout of Sonny Liston in their rematch in 1965, except Ali actually landed a right hand. With Chaves, I could see so no instances where he landed an elbow immediately before putting Rios into a head-lock.

The outcomes of last night’s Rios-Chaves fight is a bad one for Rios and Top Rank, because his victory is tainted and they’ve got a fighter who many boxing fans feel was given a gift victory over Chaves. It was one thing to think that Chaves may have gauged Rios’ eye during the final head-lock in the 9th, which we’ll never know if it actually occurred or not, but for Arum to be saying that it Drakulich disqualified Chaves because of an elbow he threw, it looks really bad.

« Did Referee Drakulich take Rios’ word that he’d been fouled by Chaves in 9th?

Overcoming the fear of Kovalev and Golovkin »