Did Referee Drakulich take Rios’ word that he’d been fouled by Chaves in 9th? 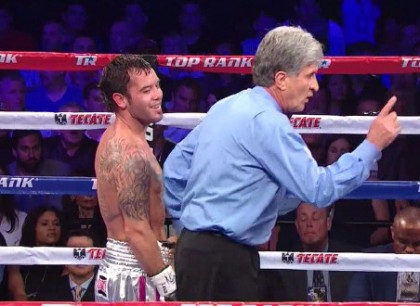 By Dan Ambrose: In re-watching last night’s controversial fight between Brandon Rios (32-2-1, 23 KOs) and Argentinian Diego Chaves (23-2, 19 KOs), it seemed to me that referee Vic Drakulich took Rios’ word that he’d been thumbed in the eye during a head-lock in the 9th round rather than having seen it himself in their fight at the Cosmopolitan of Las Vegas, Las Vegas, Nevada, USA.

Drakulich then disqualified Chaves on the spot. Rios’ complaining to Drakulich appears to have been the catalyst for him disqualifying Chaves. There was no way that Drakulich would have seen Chaves thumbing Rios during a head-lock because he was bent over with Chaves’ hard around his head.

Drakulich showed no emotion when he pulled the two apart and he appeared to be separating them to have the action re-started. But then Rios started complaining that he was getting pocked in the eye by Chaves. At that point Drakulich disqualified Chaves.

Rios was the house fighter, the A-side guy promoted by the powerful Top Rank. It looked bad that the referee stopped the fight seemingly due to Rios’ complaining about being fouled rather than from Drakulich having actually seen the foul with his own eyes.

Drakulich had already taken a controversial point away from Chaves earlier in the fight when he docked him one point for excessive holding after having given him only one warning previously. Chaves wasn’t clinching excessively though, and that was the troubling part about it.

You don’t like to see referees disqualifying fighters based on the word of one fighter rather than from something they see. Chaves could have said that he was getting pocked in the eye as well, and it would have been wrong for Drakulich to halt the fight without having seen the actual poking in the eye.

Rios said after the fight “He [Chaves] kept grabbing my eyes. He would get me in a head-lock and go like that with his thumb. That’s not right. What could I do? He grabbed me by my head. He grabbed me, so I put my head on his shoulders so I don’t get hit by a head-butt. That’s a gentlemanly thing to do. That’s the smart thing to do. That’s not the way I want to win. I wanted to come back and show everybody I’m still here. I don’t know if I was winning or not, but Chaves has tremendous skills, but come on, if you want to fight then fight. But don’t fight dirty. The reason I was on the outside was because I would go in and he’d grab me and I don’t want to get head-butted, and I don’t want me to head-butt him and have a point taken away from me. So that’s why I stayed away from him a little bit. But every time I’d go in, he’d grab me and he’d put his freakin finger in my eye. He’d do that when he had me close. He done that more than one time. He did that a couple of times. I wasn’t happy the way it went. I wanted to do more. He was just an awkward fighter. He was an ugly fighter. I never fought someone like that.”

Rios looked like he’d never fought someone that clinched before, as he was clearly bothered by that. He’s going to need to get used to facing fighters that clinch, because it’s a common thing in boxing. Chaves didn’t appear to be doing any fouling in the fight.

The only thing he was doing was clinching, and later on in the fight, using his head in response to Rios shoving his head into his face during clinches. Chaves pushed his gloves against Rios face in the 8th after he was rammed by his head in a clinch. The referee paid no attention to Rios having gored Chaves and instead focused on Chaves’ reaction to it.

« Hopkins irritated by Kellerman when questioned about Kovalev fight