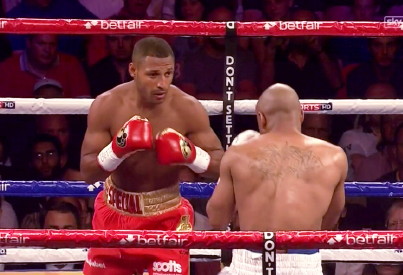 By Dan Henderson: Kell Brook is set to fight again in March against a yet to be named opponent. I should imagine that it would be a relatively easy fight to keep him ticking over for his IBF shot in June/July against Shawn Porter if the latter wins his voluntary defence, I’m not sure who he would face but I’m sure promoter Eddie Hearn will not match him too tough due to his impending title shot.

Kell was speaking to Sky Sports and this is what he had to say, ” There’s still talks going on, but I’ll be fighting maybe the middle or the end of March,”.

“I’m back in training. It’s just a keep-busy fight for me if anything because I’ve got my eye on that world title fight.”I just wanted to go for the world title fight, but Porter winning it off Devon, it has given him a little bit of extra time. I think he can get in a voluntary. I’m hearing that they’re having a rematch.”

Even if Porter has the rematch or he faces someone else Kell Brook will face the winner with which there will be 90 days to negotiate a fight if negotiations fail then it will simply go to purse bids which deep down Eddie Hearn will be hoping for as it’d be easier for him to get the fight in Sheffield, England.

In my opinion Kell Brook on his best day would beat either Porter or Alexander but I’m definitely getting fed up with his whole IBF mandatory situation and before anyone says it I know there have been injuries and so on but I just want to see if Brook can become a title holder at welterweight. If Brook wins could we eventually see the domestic clash between himself and Amir Khan? I hope so.

« Mayweather and Pacquiao: Who is Really Ducking Whom?

Schaefer says Broner vs. Maidana rematch in April on Showtime »