Schaefer says Broner vs. Maidana rematch in April on Showtime 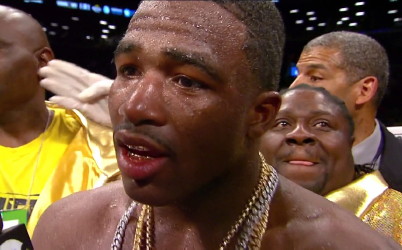 By Dan Ambrose: Golden Boy Promotions CEO Richard Schaefer is saying that Adrien Broner (27-1, 22 KO’s) will be fighting a rematch against WBA welterweight champion Marcos Maidana (35-3, 31 KO’s) in April on Showtime. This news means that Floyd Mayweather Jr. can forget all about him getting little Mayweather, Broner, to fight on his undercard on May 3rd in Las Vegas, Nevada.

Mayweather had extended an invitation to the 24-year-old Broner a couple of days after his 12 round unanimous decision loss to Maidana last December. Mayweather also advised for Broner not to fight Maidana again and instead move down in weight to the light welterweight division to fight at that weight. It looks like Broner isn’t in the mood to follow Mayweather’s career instructions.

“According to Schaefer, Adrien Broner has picked up his right to a rematch Chino Maidana,” Dan Rafael of ESPN said. “He said rematch likely in April on Show Sports.”

What’s interesting about Schaefer’s revelation about Broner fighting Maidana in April is that it effectively eliminates Maidana as a potential opponent for Mayweather’s fight on May 3rd. I’m not sure that Schaefer was aware that he was removing Maidana as a potential opponent for Mayweather by talking about the Broner-Maidana 2 rematch. But this must mean also that Amir Khan is locked in for the Mayweather fight, and they don’t have any real reason to hide it.

I’d like to think that, but it’s also possible that Schaefer messed up by letting the cat out of the bag by revealing this information. I’m sure that Mayweather wants to get Khan at the lowest possible price he can. But that’s not going to be possible if Khan figures out that he’s the only guy that they’re looking at for the fight.

Broner had already said this week that he absolutely wants the Maidana fight next and no one else. Golden Boy obviously don’t want to say no to a star like Broner and anger him, because he’s going to continue to be a star in the sport even if he does lose to Maidana for second time. A second defeat against Maidana will just mean that Broner will need to move down in weight to fight at 140 or 135.

As for Maidana, it’s likely that Mayweather didn’t want to get in Broner’s way of a rematch by selecting him to fight on May 3rd instead of someone else like Khan. If Mayweather had chosen Maidana next, not only would he be blocking Broner’s efforts to get an immediate rematch, but he’d also potentially put Broner in a position where he would look really bad if Mayweather were to whip Maidana easily.