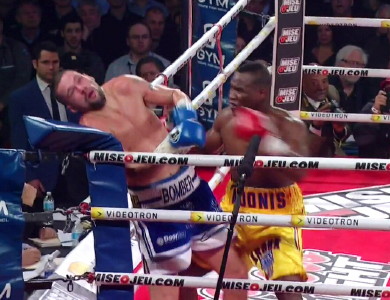 By Allan Fox: WBC light heavyweight champion Adonis Stevenson (23-1, 20 KO’s) will be having an easy title defense in his next fight against #4 Andrzej Fonfara (25-2, 15 KO’s) in a still to be determined date, according to Fightnews. This isn’t unexpected that Stevenson would be fighting the 26-year-old Fonfara next, but it’s still a little jarring to hear the news because it’s a step down from Stevenson’s last fight against Tony Bellew from last November.

Stevenson easily beat Bellew by a 6th round TKO. But Fonfara isn’t even at the same level as Bellew, and this could be over quickly with Stevenson stopping Fonfara in 2 or 3 rounds at the most.

Fonfara is still largely untested at this point. His toughest fights of his career has been against Glen Johnson and Gabriel Campillo. Fonfara looked bad in both fights, and struggled to to beat the 44-year-old Johnson. Campillo, 35, staggered Fonfara at one point in their fight last year in August, but he failed to go after him to finish him off. If Stevenson staggers Fonfara, he’ll take him out immediately.

The fight that boxing fans want to see is Stevenson against #1 WBC, Jean Pascal, but there’s major questions whether Pascal will duck Stevenson if he gets past Lucian Bute this Saturday night in Montreal, Canada. Stevenson vs. Pascal makes a lot of sense for Pascal, but he’s gone this long without fighting Stevenson and that makes you believe that he doesn’t want any part of fighting him. Stevenson has made no secret all these years about his interest in fighting Pascal, but getting him in the ring has been like pulling teeth. It’s been impossible.

Fonfara is a fighter that stands straight up, and he’ll be very easy for Stevenson to hit with his power shots. There’s nothing in Fonfara’s game that suggests that he’ll be able to make it past the 3rd round against Stevenson. Fonfara might be able to hold Stevenson to keep from getting hit, but he won’t be able to do that for 12 rounds. Sooner or later, Stevenson will get punching room and knock Fonfara’s lights out.