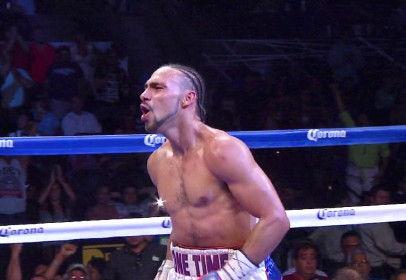 By Scott Gilfoid: #1 WBA, Kell Brook (23-0-1, 14 KO’s) says he’ll be fighting the winner of the proposed Keith Thurman vs. Shawn Porter fight by next June at the latest. The Thurman-Porter fight is being talked about by Golden Boy Promotions CEO Richard Schaefer for next April, and the chances are very high that Thurman will emerge as the winner of that fight unless he can somehow mug Thurman in the same way he did to Devon Alexander last December.

“Shawn Porter vs. Keith Thurman. The winner I get before June.”

I would have given Brook a decent chance of beating little Shawn Porter, but definitely not Thurman. That’s a step too far for Brook. I mean, if Vyacheslav Senchenko was able to stagger Brook in their fight last October, just imagine what Thurman will be able to do to Brook.

If the Thurman-Porter fight goes ahead for April, then Brook needs to look in another direction because he will not beat Thurman. That’s just not a winnable fight for Brook. He’s too slow and easy to hit to beat Thurman. I’d like to see Brook go after WBA champion Marcos Maidana. That’s a little more reasonable. I don’t think Brook could beat Maidana, but he’d have a heck of a lot better chance in a fight with Maidana than he would against a mover like Thurman. He’s too hard to hit because of his constant ring movement, and he hits hard enough to knock Brook out at anytime.

If Thurman gets a hold of the IBF belt then he’s going to hang onto the title for a long time unless someone like Floyd Mayweather Jr. shows interest in fighting him. That’s about the only guy I can see beating him. Danny Garcia might give Thurman problems when he eventually moves up to 147, but for the time being, I see Thurman as being too good for most of the contenders in the division, especially for Brook.