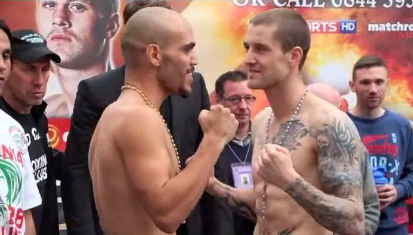 By Scott Gilfoid: WBO lightweight champion Ricky Burns 36-2, 11 KO’s) and challenger Raymundo Beltran (28-6, 17 KO’s) weighed in today for their fight on Saturday night at the Scottish Exhibition Centre, in Glasgow, Scotland, United Kingdom. Both guys pretty much weighed nearly the same amount with Burns coming in at 134.3 lbs. compared to Beltran’s 134.8 lbs. Beltran looked more solid at the weight, and my guess he’ll bulk up a little more after he rehydrates.

Burns looks like a welterweight after he rehydrates, but I’m not sure that’s going to help him in this fight because Beltran will likely be a little heavier. This isn’t going to be one of Burns’ fights where he has a big size advantage over his hapless opponent.

Beltran needs to get ready to be held a lot in this fight, because Burns does quite a bit of that when he fights. He holds and then tends to cover up on the ropes. He takes a lot of head shots that way. In Burns’s last fight against Jose Gonzalez, Burns habit of covering up on the ropes got him staggered in the 7th. Luckily for Burns, Gonzalez ran out of gas in the 8th and injured his hand in the same round. Had Gonzalez the kind of stamina that Beltran has, then Burns would have lost the fight.

Beltran, 5’8”, is just a little bit shorter than the 5’10” Burns, but he has more power, and he’s a vastly superior inside fighter than Burns. Beltran has literally seen it all, and he knows every trick in the book when it comes to fighting on the inside and against runners that hold like Burns.

If Burns chooses to do a lot of arm holding and clinching in this fight, he may find it awfully rough in trying to stall out the action. Beltran isn’t a fighter that lets you take breaks and avoid contact. He makes you fight for 3 minutes of every round, and that’s going to be a problem for Burns because he doesn’t have the power or the offense to mix it up like that.

Burns will need to run and hold for him to have a chance of squeaking out a close, and likely a highly controversial win over Beltran. But without the ability to hold without getting his head taken off at the shoulders, Burns is going to be forced to run whole time. I mean, he has the option of slugging with Beltran, but I wouldn’t advise Burns to do that if I were his trainer. Beltran is too superior offensively, and he’s got a better engine to where he can fight harder in round.

Burns can take one of two options. He can run and hope to win a decision that will likely be highly unpopular outside of the UK or he can choose to mix it up with Beltran and go down in flames in a blaze of glory, or whatever you want to call it.

« Garcia/Matthysse vs. Mayweather makes no sense

Mosley thinks Canelo has a good chance to beat Mayweather »