Mosley thinks Canelo has a good chance to beat Mayweather 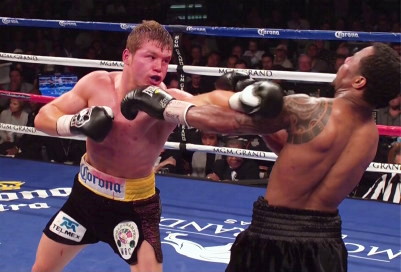 By Dan Ambrose: Shane Mosley, 42, feels that WBA/WBC junior middleweight champion Saul “Canelo” Alvarez (42-0-1, 30 KO’s) has improved a lot in each of his fights since he started following him, and he thinks that he a good chance of beating 36-year-old Floyd Mayweather Jr. (44-0, 26 KO’s) on September 14th.

Mosley took a beating from Canelo last year in losing a 12 round unanimous decision. Mosley also was soundly beaten by Mayweather Jr. in 2010.

Mayweather Jr. did a better job in beating Mosley, but Canelo gave him more punishment due to his weight and size advantage over him.

Mosley told RingTV “In the beginning I was leaning toward Mayweather, but Canelo has a real chance…When I fought Canelo, he had gotten better from the tapes that I had watched…Canelo sort of fights to the occasion, so this could be a tremendous fight.”

Canelo beat Mosley, but it wasn’t much of a victory because Mosley was 41-years-old and WAY past his prime when the fight took place. A prime Mosley would have been a nightmare for Canelo, even if he had a 35 pound weight advantage over the 135 lb. Mosley in his prime.

It’s not surprising that Mosley is starting to change his opinion about this fight, because he’s been raving about the red-haired Canelo since before the Mayweather-Canelo fight was even signed. Mosley was the one that said that Canelo is the fastest guy he’s ever fought, according to Golden Boy Promotions CEO Richard Schaefer.

I just wonder if Mosley is looking to get an eventual rematch with Canelo. All this his high praise for Canelo makes me suspicious. Mosley has got to know that his chances of ever fighting Mayweather Jr. again are zero, but with Canelo being only 23, the door could still be open for Mosley if he beats Anthony Mundine and maybe one other fighter with a name.

Canelo clearly doesn’t have the same kind of hand speed that Mayweather Jr. has, so I don’t know what Mosley is talking about in thinking Canelo is the fastest guy he’s ever fought. Anyone with 2 eyes can see that Mayweather Jr. is much faster than Canelo. I think Canelo is about as fast as Miguel Cotto and Pablo Cesar Cano. He’s at that level, but definitely not even close to where Mayweather Jr. is.

The only way Mayweather Jr. loses to Canelo is if he chooses to fight him like he did Cotto by standing still and trying to match him punch for punch.