(Photo credit: Sumio Yamada) By Rachel Aylett: Last night in Montreal, Adonis ‘Superman’ Stevenson successfully managed to quieten his detractors with a clear and dominating victory over American Tavoris Cloud, the former IBF light-heavyweight champion. This fight was for Stevenson’s WBC title at the same weight.

Those aforementioned detractors had suggested that Adonis was just a one-hit wonder after his one round destruction of Chad Dawson which won him the WBC title back in June and that he would soon be found out once he stepped in with an opponent who could take his punches.

In his first defence however, he proved otherwise. We have seen that he is a devastating puncher and his record backs this up. On this occasion though he showed that he has mastered so many different facets of the sport as to be considered a true all-rounder. To many people’s surprise he boxed on the back foot, letting the slow Cloud trundle in, as he always does. Cloud was met with not only the straight left hand from Stevenson’s southpaw stance, but punches from all angles, and all of them thrown with speed and accuracy. The champion also showed superb movement and foot speed and really did look like the complete package. Cloud was clearly hurt from left hands in rounds 1, 4 and 7, although managed to stay on his feet. His toughness has never been questioned. In the last couple of rounds though his face started to mark up and, as in his last fight against Hopkins, he sustained cuts over both eyes. As a result, at the end of the seventh round his corner called the referee over to inform him that they were retiring their man.

For Stevenson, it was like shelling peas and I have no doubt that had the fight gone the full 12 rounds, his dominance would have stretched that far. He showed no signs of fatigue at the end of seven rounds and confirmed afterwards that he is always ready to go the full distance. This victory was probably the best possible result for Adonis. Had he scored another early blowout, the doubters would still have been on his case, arguing that as soon as an opponent survived the early rounds he would outbox Stevenson. Nothing of the sort, as Stevenson proved here that his skills are as good as anyone’s in the division. He clearly won every one of the completed rounds.

The fight followed a similar pattern to Cloud’s last two outings in which he lost his IBF title to veteran Bernard Hopkins and also the fight prior to that, when he was handed a gift decision against Spaniard Gabriel Campillo. He rumbles forward, not throwing enough punches, and in all of these fights he was comprehensively outboxed by a more skilled opponent. Cloud just doesn’t have a second gear. Interestingly, against Hopkins at least Cloud was in the fight and managed to win some rounds.

The idea that Stevenson was just a big hitter failed to take into consideration his excellent amateur career in which he won a silver medal at the 2006 Commonwealth Games and was twice Canadian champion. Some people might be asking why it has taken so long for him to reach the top. This may have something to do with his unsavoury past when it recently came to light that he had served 18 months in prison for extra-curricular activities when he was in his late teens. It seems that he has well and truly turned his life around though.

The next step for Stevenson is due to be a mandatory defence against Briton, Tony Bellew, who was at ringside. Will this fight go ahead? Probably, as Stevenson is not yet big enough to be able to ditch his WBC belt. His preferred choice of opponent would be Bernard Hopkins. Whether B-Hop would want to take on such a dangerous opponent at this stage of his career is very much open to question. HBO’s Max Kellerman voiced what we were all surely thinking in the post-fight interview, does Adonis want to fight rival WBO champion Sergey Kovalev? Adonis suggested that he had beaten two champions in the last four months and that Sergey needed to improve his resume before the two could fight.

As we know, it’s money that talks. If the networks and the promoters want to make a match for Superman with either Hopkins or Kovalev, they will make it happen and Bellew will have to bide his time. Sitting at ringside, he will now know that if and when the fight happens he has a gargantuan task on his hands.

Not only was last night’s result good for boxing, it was great for the light-heavyweight division which has been moribund for too many years now. Veteran names like Tarver, Jones Jr., Johnson and Woods have now been replaced by two of the most exciting and devastating punchers in the sport in Stevenson and Kovalev. Although neither of these is young by any stretch of the imagination, being 36 and 30 years of age respectively, they are fresh! They have both breathed life into the division and a showdown between the two would surely generate a huge amount of excitement all over the boxing world. 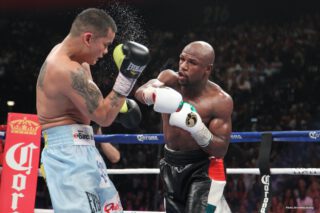