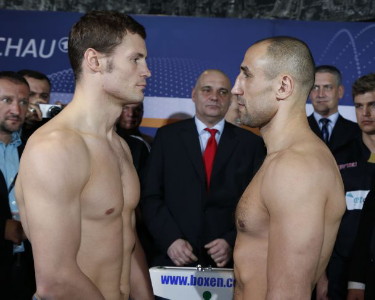 By Thomas Cowan: WBO super middleweight champion Arthur Abraham faces former champion Robert Steiglitz in an “all-German” clash. Russian-born Steiglitz held the strap for 3 years and managed to milk his title against pretty poor opponents throughout his reign because all the top super middleweights were busy with the Super Six tournament.

However, last August, his luck ran out when the WBO forced him to face Abraham, who secured a comfortable victory. Unfortunately, a rematch clause means Abraham will be making a second easy defence of his title after he already made an optional defence against mediocre Frechman Mehdi Bouadla. Unless Abraham has an awful night or Steiglitz comes out looking like a completely different fighter, I can only see Abraham winning this fight.

Also fighting on the card is #2 WBO George Groves. The Brit looks likely to face the winner of this fight at some point in the summer. Groves recently changed promoters from Frank Warren to Eddie Hearn so he can fight on Sky and to increase his chances of getting a fight with IBF super middleweight champion Carl Froch. If Groves could pick up the WBO strap every boxing fan in Britain would be calling for Froch to face him in an all-British unification fight.

Hearn’s been feeding Groves easy opponents since he signed him, with Groves facing Argentinian journeyman Dario Balmanceda two weeks ago in London and now fighting unknown Syrian Baker Barakat in an 8 round fight in Germany. Obviously, it would have been impossible to organise a bout with a top 15 ranked opponent at two weeks notice so Hearn’s just giving Groves an easy tune-up which gives German fans a chance to watch him before he faces Abraham or Steiglitz.

I presume the fight has only been scheduled for 8 rounds because a 10 or 12 rounder could create scheduling issues. If Groves does face Abraham or Steiglitz in the summer, I think he’s good enough to give them serious problems because he’s a fast, clever awkward fighter with two good hands.

Any potential fight would happen in Germany, so after Matthew Macklin was robbed against Felix Sturm and Ola Afolabi was robbed against Marco Huck, Groves will be looking for a knockout or a completely dominant performance because if the fight isn’t completely one-sided, the chances of a Brit getting a decision against a German in Germany is highly unlikely.

« Burns: I could fight Broner later on in the year