Burns: I could fight Broner later on in the year 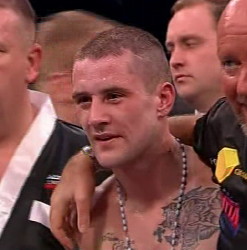 By Scott Gilfoid: WBO lightweight champion Ricky Burns (35-2, 10 KO’s) is still floating WBC lightweight champion Adrien Broner’s name as a potential future opponent despite having turned down the fight three times in the past. Broner has been trying to get a fight with Burns for close to two years, but with no luck. Tired of wasting his time trying to get a fight against a reluctant Burns, Broner is moving up to welterweight to face WBA champion Paulie Malignaggi on June 22nd.

Burns said to Sky Sports “There’s still talk about this fight [Broner vs. Burns] fight happening. When I was speaking to Eddie he said his team has actually been in touch to see about it. Eddie’s said my next fight is definitely in Glasgow, but it’s [fight against Broner] a possibility for later on in the year.”

I think this is case of a fighter that has waited too long and missed his opportunity, if Burns is even serious. There are some fighters that like to namedrop just to get the increase in popularity that comes with name dropping big name opponents because then some fans see them as being in the same league as the popular fighter. Is Burns a name dropper? I don’t know, but I do know he’s had several chances to fight Broner and has never stepped up to the plate to take the fight.

If Broner moves back down to 147 if he beats Malignaggi or losses to him, then that has got to be seen as move where Broner is retreating from the risks involved in the welterweight division. There’s no other way you can interpret it. The money is bigger, the fame is bigger and the opportunities are much bigger at welterweight than they are at lightweight.

If Broner moves back down to lightweight then he’s basically saying he’s afraid of what could happen to him if he stays at 147. Broner taking his career backwards to fight a guy like Burns sends an awful message that Broner or Golden Boy Promotions don’t believe he can hack it in this weight class. In that case then he belongs at lightweight fighting guys like Burns, if he can get that fight.

« Road to Donaire vs. Rigondeaux on March 30th on HBO