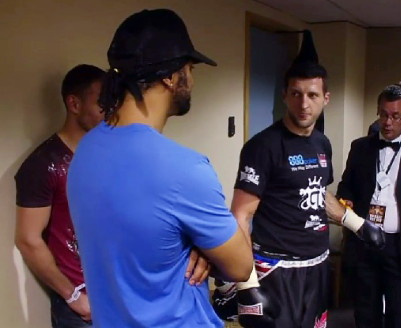 By Scott Gilfoid: In an interview with Sky Sport, IBF super middleweight champion Carl Froch (30-2, 22 KO’s) pulled out the old excuses for why he got beat by Mikkel Kessler back in April 2010 in their previous fight, blaming it on not being in the best of shape.

Why Froch, one of the most disciplined fighters in the game in terms of conditioning, wasn’t in the best of shape for his 2010 fight with Kessler is the big question.

Froch said to Sky Sports News “The fight could have gone either way in Denmark but I know I wasn’t in tip-top shape…a volcanic ash cloud played a part in it. I went over their late and wasn’t 100 per cent focused or on my weight like I usually am – but you saw against Bute, when I put in a barnstorming performance, what I can do when I am fresh and jump in.”

Froch thinks he lost his training edge because his transportation to Denmark was delayed for the fight because of a huge volcanic ash cloud that delayed him from departing from England to get to Denmark for the fight.

I honestly don’t know how Froch could lose his conditioning just because his transportation was delayed. It’s not as if he stopped training or anything. Froch kept training but somehow he feels this was a factor in him losing the fight.

I just see it as Froch coming up with an excuse. He lost the fight and it wasn’t close enough for it to go either way as Froch says. Froch lost and he deserved to lose. If Froch was given the decision instead of Kesser then there would have been a huge outcry from boxing fans. There weren’t any complaints about Kessler getting the win because boxing fans agreed with the decision. It was an easy decision to agree to because Froch was schooled in that fight.