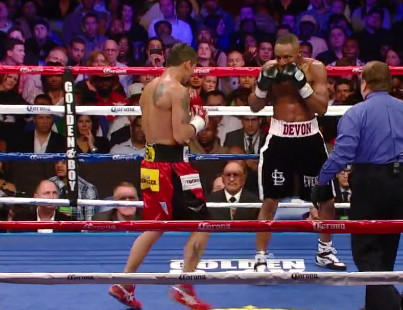 By Scott Gilfoid: Dominic Ingle, the trainer for unbeaten Kell Brook (29-0, 19 KO’s), thinks IBF welterweight champion Devon Alexander (24-1, 13 KO’s) can’t handle pressure from his opponents. Ingle thinks Alexander struggles when he’s met adversity. Ingle points to Alexander’s loss to Timoty Bradley in 2011, and his close decision wins over Lucas Matthysse and Andriy Kotelnik in the past. He thinks those guys gave Alexander problems due to their pressure.

Ingle said to secondsout.com “Devon Alexander’s alright when he’s doing what he wants to do, but as soon as someone starts to apply some pressure like what we saw with Matthysse and [Andriy] Kotelnik, and I don’t classify them as good as Kell Brook.”

A couple of things here: first off, I don’t rate Brook as being as good as Matthysse or Kotelnik. I definitely see them as better fighters than him.

Secondly, I don’t agree that the way to beat Alexander is by simple pressure. That’s not why Alexander had problems with Mathysse, Kotelnik and Bradley. They each different fights and it was different things in each fight. Bradley hurt Alexander with his head-butts.

The fight was pretty close but towards the end of the fight the head-butts from Bradley really took the steam out of Alexander because he was getting brained by Bradley’s hard head and it was definitely hurting him. In Alexander’s fight with Kotelnik, Alexander had some problems with Kotelnik’s hard jab, which he was sticking in the younger Alexander’s face all night long.

That was a younger Alexander because the current version of Alexander would have handled Kotelnik’s jab and dominated him to get an easy win. Matthysse and Bradley were hard fights for Alexander because both of those fighters were so explosive with their combinations. They were really fast and powerful, and Alexander had problems with them. However, Alexander has dramatically improved since moving up to welterweight because he doesn’t have to drain water weight like he did back then and he’s a lot stronger now.

Alexander is a much different fighter at 147 than he was at 140, and he’s looked great in wins over Marcos Maidana and Randall Bailey since moving up in weight in February 2012.

« Arum not sure if Pavlik wants to continue his boxing career