Matthysse vs. Lundy on January 26th on Showtime at the Hard Rock Hotel in Las Vegas, Nevada 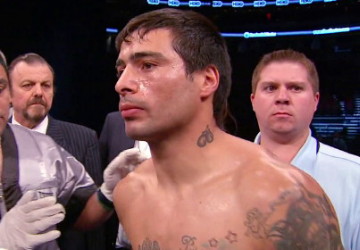 By Dan Ambrose: The January 26th bout between interim WBC light welterweight champion Lucas Matthysse (32-2, 30 KO’s) and Hank Lundy (22-2-1, 11 KO’s) has been moved from Los Angeles to the Hard Rock Hotel and Casino, The Joint, in Las Vegas, Nevada.

Matthysse, 30, has made no secret to the fact that he’s hoping to face WBC light welterweight champion Danny Garcia in 2013. However, it’s up to their mutual promoters at Golden Boy Promotions and the World Boxing Council whether Matthysse will get that fight because Garcia doesn’t appear to be chomping at the bit to face Matthysse.

When his name is brought up, Garcia shows little interest and seems more interested in other targets, like his upcoming February bout against former two division world champion Zab Judah.

Matthysse can’t afford to slip up and lose against Lundy because that would wreck his big plans on getting Garcia to fight him. Matthysse made a big mistake in his loss to Judah in 2010 by not going after Judah in the early rounds of the fight, and by the time that Matthysse did turn up the gas on Judah from the 5th round on, it wasn’t enough to impress the judges. It was enough to impress boxing fans but not the judges.

Lundy will likely try and start fast against Matthysse so that he can build up a lead and then coast with it in the second of the fight. However, Matthysse is going to put a lot of pressure on Lundy and force him to brawl, which is something that Lundy is good at but he’s not able to fight like that for long period of time.

Lundy will have a big advantage in hand speed over Matthysse in this fight, and if he can catch with a big shot that he doesn’t see there’s a possibility he could pull off an upset. Matthysse isn’t hard to hit and Lundy is dangerous when he’s throwing shots that his opponents don’t see coming.

« Pavlik vs. Bute possible for March; Andre Ward not ready to fight

Froch should give Dirrell a rematch instead of Kessler »