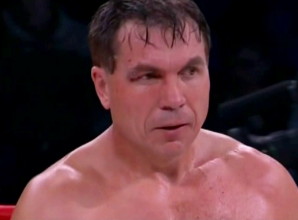 Maskaev, fighting for the first time since being stopped in the first round in December 2009 by Nagy Aguilera, knocked Beck down three times en route to stopping him in the 3rd. Maskaev put Beck down once in the 1st and two more times in the 3rd before the fight was halted by referee Viktor Panin at 2:59 of the round.

Maskaev had knocked Beck down earlier in the 3rd with a nice left hook to the head. Maskav then flurried on Beck until dropping him with a crushing right hand to the head that put Beck on his knees. Beck made it back to his feet but was unsteady and the referee decided to halt the fight at that point.

Maskaev looked really slow but his power was still very much there. In the 1st round, Maskaev threw few punches until the last 30 seconds of the round where he was able to drop Beck with a series of hard right hands to the head.

In the 2nd round, Maskaev suffered a cut over his right eye from what appeared to be a clash of heads. Beck was able to land a lot of nice shots in this round through Maskev’s leaky defense. However, Maskaev was still in control of the fight with his hard right hands and left hooks.

In the 3rd round, Maskaev upped the pace and was able to hurt Beck early in the round with a left hand that dropped him. Beck mostly looked to hold on after getting hurt, and that saved until the end of the round where Maskaev unloaded on him with a storm of punches that eventually put Beck down.

« David Haye: What a waste