Maskaev vs. Arreola Could be Next – News 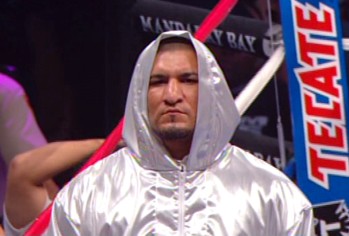 By Eric Thomas: Former World Boxing Council heavyweight champion Oleg Maskaev (36-6, 27 KO’s) could be finding himself fighting it out with WBC top ranked #1 contender Chris Arreola (27-0, 24 KO’s) next if things work, according to RingTv’s site. Maskaev, now 40, lost his title to Samuel Peter in a 6th round stoppage last year in March, losing his WBC title in the process. Maskaev had been hoping to get a fight with WBC champion Vitali Klitschko, but that fell apart when Klitschko went to court so that he wouldn’t have to fight Maskaev, who the WBC slated as Klitschko’s mandatory challenger.

Klitschko will now be fighting Britain’s David Haye in what will likely be a huge money fight, while Maskaev has to look for the best reasonable alternative. Unfortunately for Maskaev, there’s not a whole lot of alternatives available for the 40-year-old ex-heavyweight champion to make some big money.

Obviously, Maskaev would be serving the purpose of being the sacrificial lamb for Arreola, a big named opponent who is clearly seen his best days. It’s kind of similar to Amir Khan’s recent fight against Marco Antonio Barrera, also an older fighter like Maskaev that is on the decline.

Talks have reportedly begun between the promoters of Maskaev and Arreola, so hopefully this is a fight that can take place in the near future. Arreola, 28, is ranked #1 in the WBC, #2 in the IBF, #4 in the WBO and #9 in the WBA, has faced mostly limited competition in the form of B class fighters like Chazz Witherspoon, Travis Walker and Jameel McCline.

However, Arreola has passed each of those tests, not looking exactly great but doing enough to get the victory. What Arreola needs now is a fighter with a good name like Maskaev, but not someone with enough life in their bodies, like Tony Thompson, that they can still beat Arreola.

Chris didn’t look good in his last fight against McCline, stopping him in the 4th but getting rocked twice by the out of shape journeyman. Arreola has gotten bigger and bigger since beating Witherspoon last year by a 3rd round disqualification, putting on close to 20 pounds and looking in horrible condition.

Against a 40-year-old Maskaev, it might not matter whether Arreola trains hard for the fight, because he should have enough ability and youth to take out the aging Maskaev without too many problems. This would leave Arreola at the top spot next year for the winner of Vitali vs. Haye. Right now, it looks as if Klitschko should be the one that emerges as the winner of the fight, but either way, Arreola will be in a win-win position no matter which fighter comes out on top.

« Khan-Kotelnik: Andriy Worried about Getting a Fair Deal from The Judges

Is Pavlik destined to Be a Boring Champion? »