David Haye: What a waste 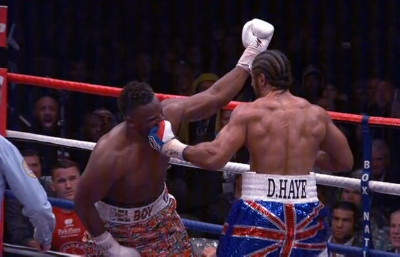 By Jake Denney: I would like to start this article that up until his fight with Wladimir Klitchsko, I was a David Haye fan. He unified the cruiserweight division and stepped up too heavyweight in search of a world title. At that time the heavyweight division was in need of freshening up. In Haye it had a character, yes he was arrogant and outspoken but he was a true athlete with outstanding skills. Fast hands and fast feet and he packed significant power in his punches. There was always a question mark over his chin however.

Haye would finally get his chance at a world heavyweight title when he signed to fight WBO, IBO and IBF champion Wladimir Klitschko in June 2009. Haye pulled out of the fight claiming a back injury, an injury that the Kitschko camp claimed they never saw medical documentation for. Haye then turned his attention too WBA champion Nikolay Valuev and on 7th November 2009, Haye defeated the giant Valuev in Nuremberg Germany.

After defences against mediocre challengers such as John Ruiz and Audley Harrison, Haye signed, for the second time to fight Wladimir Klitchsko in Hamburg Germany on 2nd July 2011 for the WBA,IBF,WBO and The Ring heavyweight titles. The fight generated interest that hadn’t been seen in the division for many years with Haye promising a savage knockout. A nation and myself included brought into the dream. Haye was his usual arrogant self, but on this occasion he over stepped the mark, refusing to shake Klitchskos hand on many occasions, one of the biggest signs of disrespect that one man could show to another. Many of his remarks were seen as distasteful but in doing so Haye was backing himself into a corner, come fight night he would have to emerge victorious or all the talk would be in vain.

As we all know the rest is history, Klitschsko eased to a unanimous points victory with Haye rarely threatening the decapitation he had promised the world. At the end of the fight Haye held his hands as if to say he was pleased with himself for taking Klitschsko the full quota. What a joke! I would like to sit Haye down and look him in the eye and ask him if he really left everything in the ring that night. I doubt it and I seriously doubt that Haye had the heart or guts to defeat Wladimir.

The path he has taken since that night in Germany backs up my claim. He has fought once in what can only be described as a money-making fight against Dereck Chisora in London on 14th July 2012. Why didn’t he get straight back in the ring after defeat instead of just calling out the Klitschko brothers like it’s his divine right too another shot? I would love to see him take on unbeaten David Price, Tyson Fury or even Tomas Adamek as he could defeat these fighters and then stake another claim for a title shot? Will he? No, because I think he would rather be a reality TV star then put his incredible talents too use. What a waste.

« Will Pacquiao soon end up like Roy Jones Jr?