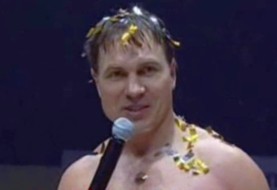 By Erik Schmidt: Former World Boxing Council (WBC) heavyweight champion Oleg Maskaev (36-6, 27 KOs) destroyed Rich Boruff (17-3, 10 KOs) in the 1st round on Saturday night at the Ice Palace, in Saransk, Russia. Maskaev, 40, landed a chopping right hand to the head of a partially bent over Boruff at the midpoint of the 1st round, staggering him and then sending him down on his back in front of the large Russian audience.

Boruff got to his feet at the count of seven, but referee Alexander Kalinkin stopped the fight at 1:35 of the round much to the disappointment of the forty-year-old Maskaev. However, if there’s anyone that Maskaev should be disappointed with it’s his self for having fought such a poor opponent.

Boruff, 37, though not a fighter with a bad record, all of his wins have come against soft opposition. Boruff, 6’2″ 252, looked badly out of shape and not nearly someone that should be fighting a fighter like Maskaev, whose ranked number #7 in the IBF and WBC heavyweight division. With his skills, Maskaev should be at least fighting a good B class fighter, if not a lower ranked top tier opponent.

In the 1st round, Maskaev stalked Boruff around the ring looking to land. Boruff looked terrified for the most part, staying against the ropes and moving as if he wanted to start running at gallop. Maskaev closed the distance and landed a chopping right hand to the head, and then a right to the midsection.

Boruff then made a half hearted attempt to land a shot, but Maskaev backed up quickly to avoid getting hit. Actually, it wasn’t all that quick, because at 40, Maskaev now looks terribly slow, much slower than he was earlier in his career. However, in comparison to the portly Boruff, Maskaev looked blazing fast on his feet and with his hands.

Maskaev then landed a short right hand to the head, and then a nice right-left combination. Maskaev succeeded in planting himself next to Boruff and landed a left-right to his midsection. Boruff then missed two jabs and finally connected with a short right hand. The punches were all very slow and it’s sad that he was able to land anything.

Maskaev immediately fired back with a chopping right hand to the head which sent a staggering Boruff down on his backside on the canvas. He got up and looked okay, but referee Alexander Kalinkin decided to stop the fight at 1:35 of the round. Maskaev then marched around the ring, looking unhappy and gesturing as if he was disappointed that the fight had ended so quickly.

Maskaev lost his WBC heavyweight title in a 6th round stoppage against Samuel Peter in March 2008. Since then, Maskaev has fought once, beating journeyman Robert Hawkins by an unimpressive 10-round decision in September 2008. With this win, Maskaev is slated to be the mandatory challenge for the winner of WBC heavyweight champion Vitali Klitschko and challenger Juan Carlos Gomez this Saturday night.