Abraham interested in fighting Froch, Pavlik, Dirrell and Stieglitz in 2013 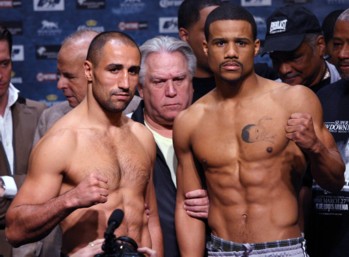 In addition to those fights, the 32-year-old Abraham is interested in facing Carl Froch and Andre Dirrell in rematches.

The rematch with Stieglitz will guarantee Abraham at least one win during 2013. However, I don’t believe that Abraham will get past Pavlik, Froch or Dirrell. A loss to any of them will likely prevent the other fights from taking place.

I’d like to see Abraham and Dirrell back in the ring because the talented Dirrell never was able to finish off Abraham in their fight in March 2010. Dirrell was totally dominating Abraham and was looking to finish the fight in fine form when he slipped on the canvas in the 11th round and was fouled by Abraham, who punched Dirrell in the head with a huge sledgehammer right hand that knocked Dirrell out.

The fight was then stopped and Abraham disqualified for the fouling of the defenseless Dirrell. Ever since that fight, Dirrell has been chomping at the bit wanting to get back in the ring with Abraham so that he could continue his total domination of the slow fighter.

I don’t see any point in Abraham and Stieglitz fighting again, because Abraham easily beat Stieglitz last August by a 12 round unanimous decision in a pretty much one-sided fight. This isn’t a fight that was close and it’s kind of a joke that the two of them are going to fight again. Stieglitz doesn’t have the power, size, speed or talent to beat Abraham in this lifetime and there shouldn’t be another fight between them.

Pavlik is looking for a fight after his scheduled February 23rd fight against WBC/WBA super middleweight champion Andre Ward fell apart with Ward suffering an injury to his right shoulder. Former IBF super middleweight champion Lucian Bute is one of the names that Pavlik is looking to fight in early 2013, but that fight likely won’t happen. Pavlik will likely have to settle for another 3rd tier opponent while he waits on a possible fight with Abraham.

« Does boxing need an adrenaline boost?