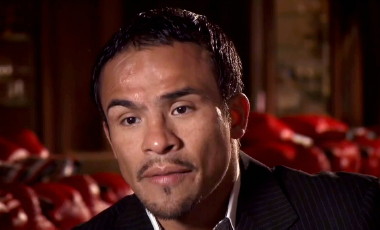 By Chris Williams: If the WBO “Fighter of the Decade” Juan Manuel Marquez is able to negotiate a 5th fight with the Filipino Manny Pacquiao, Marquez will very likely eclipse the $9.1 million that the great Mexican fighter Julio Cesar Chavez received for his 1996 clash with a then young Oscar De La Hoya, according to the Manila Bulletin.

That should make Marquez the highest ever Mexican boxer, which only seems fitting because many boxing fans already see him as the greatest Mexican fighter of all time.

It’s hard to argue against Marquez being the greatest because he’s had incredible longevity in the sport where a lot of great were long washed up by the time they reached his age of 39.

Marquez is still fighting at a high level, and who knows how much longer he could fight if he chose to. Marquez doesn’t wish to stick around for more than one or two more fights tops before retiring. He’d like to face Pacquiao again so he can knock him out for the second time and even up their series.

Right now, Pacquiao has a 2-1 edge over Marquez in their four fights with their first fight being a draw. However, Pacquiao’s wins were controversial and their 20004 draw with also controversial, as many boxing fans saw Marquez winning the last 11 rounds of the fight after getting knocked down three times in the 1st round.

Pacquiao will likely receive a much bigger paycheck than Marquez in a fifth fight due to Pacquiao’s popularity. However, it should be a lot closer than last time when Pacquiao received a guaranteed $23 million compared to Marquez’s $6 million. For Pacquiao to get his usual $20+ million for this fight they’re going to have to sell a lot of the tickets in the 80,000 seat Cowboys Stadium, and I’m not sure if they’ll be able to sell enough to get Pacquiao the kind of money he’s been getting.

« Abraham interested in fighting Froch, Pavlik, Dirrell and Stieglitz in 2013