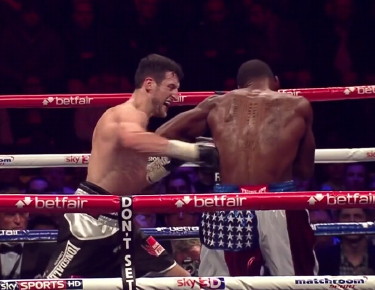 By JW Ryan: Fresh from his demolition job of Yusaf Mack a very exciting 12 months is in store for the fighting pride of Nottingham. But what if anything have we learned over the past few fights which will lead us to believe that the losses on his current record can be reversed. Before delving deeper, I must admit that based on the first outing it will take a effort of biblical proportions for Lucian Bute to defeat Carl Froch, even with Froch conceding home advantage.

The clinical precision shown in Froch that night in the breaking down the Romanian born Canadian’s defence was effortless. The recent victory by Bute has does nothing to dampen my sentiments, a rather methodical and uncertain performance showing all the straits of a boxer who is very low in confidence. Equally I don’t think we can take very much from the Froch victory over Mack, as simply the ‘cobra’ was largely untested.

Firstly to address Froch’s first conqueror, Mikkel Kessler. A boxer introduced to the UK during his failed attempt to wrestle the super middleweight crown from Joe Calzaghe in 2007. On the night in question Calzaghe was in excellent form however Kessler was given much kudos for the valiant display and although a convincing points victory went Calzaghe’s way, the ‘Viking Warrior’ gained many admirers in the process.

In weighing up the potential outcome of a rematch in 2013 I feel the defining characteristic lies within some minor changes to Carl Froch. To elaborate; prior to the Andre Dirrell fight which was a very poor spectacle, 9 of the previous 10 fights were all inside the distance. The only fight that bucked the trend was the Jean Pascal fight which was very much a defining fight for Froch. I believe it changed this KO trend simply due to the occasion itself, a respected world champion where Froch performed exceptionally well with heightened sense to the task at hand. Before and after this fight given the additional confidence brought on by the Pascal victory, Froch adopted a ‘blast ‘em away’ slightly cavalier approach. We Know Froch is heavy handed (68% KO’s), but the difference in class between opponents pre-Pascal and post-Pascal is size-able.

In hindsight I think it is evident that that this cavalier approach was obvious, low hands relying on lateral movement and quick reflexes. While at best the tactics are dangerous but when fighting in Kessler’s back yard, were never going to be suited. Given Kessler’s durability and work rate alone Froch would need a KO or the belt was staying in Denmark. I think there is a fundamental improvement in Froch since that fight and it is very basic in nature, the calibre of opponent since Kessler coupled with the Kessler loss has brought a greater fundamental defence to Froch.

It would be hypocritical to say Froch has a tight defence, I would suggest he never has or never will but I do believe there has been a marked improvement since the night in Denmark. Froch has the tools to disarm Kessler, of that there is little doubt. Concern lies in the styles of both fighters. If the fight is to descend into a centre of the ring dust up then I don’t think the Froch of old would be able to reverse the result. The Froch we saw last night but more evidently against Bute could, provided the defensive improvements are integrated within his heavy hitting unorthodox style.

Kessler will not be blasted away, in a fight which goes 12 rounds, Froch needs to ensure that Kessler is outworked. It is a fight which honestly Froch deserves to have for the journey he has taken in his career for which he must be given major credit. But the advances in Froch need to remain and possible improve, if Froch is to return to original type then as a Froch fan I would worry…A points win is the only potential victory for Froch and his fight strategy should reflect this.

Steward smiling down on Banks »