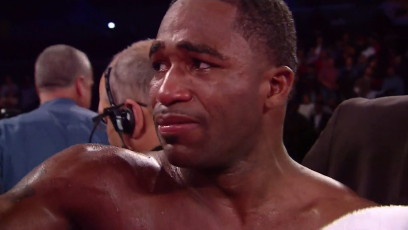 By Dallan O’ Donnell: After his 8th round stoppage of Antonio DeMarco last night, Adrien Broner has become a bigger draw in the sport and he now honestly believes he is the next ‘big thing’ once Floyd Mayweather and Manny Pacquaio have retired. But the truth of the matter is Broner’s world will collapse once he faces Ricky Burns.

Burns, the WBO champion has called on Broner to fight him, yet Broner has had no interest in facing the Scottish world Champion.

The fight would generate massive interest in the UK and there is the money incentive for Broner while there is the incentive of unifying the lightweight division for Burns.

There is one problem. Broner can’t beat Burns and he knows it. Burns hits so hard and accurately it won’t matter what Broner tries to do with his defence.

Broner tries to copy Floyd Mayweather’s unique defensive style but no one has yet to tell Broner he is NOT Floyd Mayweather. Anyone can copy another fighter but it is just a matter of fact that he cannot be Mayweather.

Burns is far more talented than the overhyped, Broner. It is my gut feeling that Burns could be the first of many to beat Broner. When Juan Manuel Marquez comes back to his natural weight he would beat him too.

If that wasn’t bad enough if Broner was to step up a division to light Welterweight or Welterweight.

But we should all wait to see what excuse Broner will use not to fight Burns. I don’t believe he will fight the Scot. If he does he can simply kiss goodbye to his WBC title.

If the fight happens, Burns will not only win, but he will stop his over matched opponent.

« DeMarco vs. Burns : A good comeback fight for Antonio