McCline: Deontay Wilder is the next great; saw him give Wladimir hard work 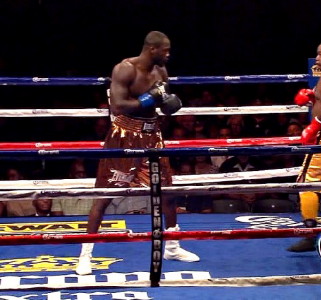 By Scott Gilfoid: Heavyweight Jameel McCline says he sees unbeaten heavyweight prospect Deontay Wilder (25-0, 25 KO’s) as a future great after spending time with him working as sparring partners in the camp of IBF/IBO/WBA/WBO heavyweight champion Wladimir Klitschko recently before his fight with Martiusz Wach.

McCline said on his twitter page “Bronzebomber [Deontay Wilder] is the next great thing. Seen him give the champ W Klitschko great work. I told him take your time. He will listen.”

McCline knows talent when he sees it, as he’s been in boxing for a long time and he’s seen a lot of different heavyweights over the years. He’s not jump complimenting Wilder for the heck of it. He speaks the truth because he knows what kind of talent Wilder has after watching him work out with Wladimir. I wish I could have been a fly on the wall during those sparring sessions because it had to have been really great stuff to see Wilder and Wladimir trading bombs.

Wilder has already been predicted for big things by the late great trainer Emanuel Steward, and even Wladimir was in awe of Wilder’s talent, speed and quickness during their camp. Wilder emerged as Wladimir’s #1 sparring partner almost immediately and was a big factor in helping him get prepared for the Wach fight.

Next month, Wilder faces Kelvin Price (13-0, 6 KO’s) in a 10 round bout on December 15th on the undercard of the Amir Khan vs. Carlos Molina fight card at the Sports Arena, in Los Angeles, California, USA. While the fight is scheduled for 10 rounds it’s likely going to end very early on with Wilder capturing his 26th consecutive knockout as he heads for the world record for heavyweights of 44 straight knockouts.

Wilder has a good chance of catching up to Clark’s record and surpassing it while at the same fighting top level opposition. Wilder has the kind of power where he can KO even the top level opposition. That’s the kind of raw power that Wilder has. He used to be just a fighter with an incredible right hand and nothing else, but he’s added a left hook that is almost as good as his right hand, and his jab is also a formidable weapon in it’s own right.

Read: Malignaggi: Hatton has to beat Senchenko in a spectacular fashion

NEXT: Hector Camacho passes away at 50