Malignaggi: Hatton has to beat Senchenko in a spectacular fashion 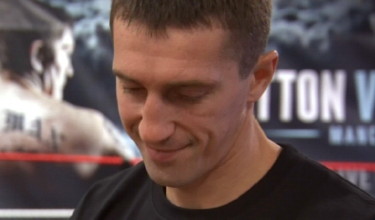 By Scott Gilfoid: WBA World welterweight champion Paulie Malignaggi is really hoping that Ricky Hatton looks spectacular on Saturday night in facing his recent knockout victim Vyacheslav Senchenko in the UK. Malignaggi insists that Hatton has to look great in beating Senchenko so that boxing fans won’t laugh up a storm when Hatton fights him immediately for a world title, and in doing so leap frogging all the top contenders that have worked so hard all these years hoping to get a title shot while Hatton has been in a 3 1/2 year retirement.

Yeah, boxing isn’t a fair sport, because the sanctioning should make sure that the guys that work hard to try and get title shots aren’t pushed aside so that more popular fighters like Hatton can get quick title shots off of one fight against a recently knockout fighter in Senchenko.

Malignaggi said to Sky Ringside “You [I] want Ricky to be spectacular because a fight in the States [with me] will be laughed at so to speak. You [I] don’t want anyone saying that he’s coming back after 3 1/2 years and getting a title fight. You [I] want him to look great to start building a hype machine in the States. You want it to get the buzz as the fight gets close it’s not quite as it is in the UK yet. I think if Ricky looks spectacular on Saturday night then there’s a chance for a fight with me and others to be made.”

I think boxing fans will laugh at this fight, because they’ll see it as a joke that Hatton is getting a title shot after only fight. That honestly is laughable because Hatton should have to work his way to a title shot just like other fighters in the sport.

Another laughable thing is that Hatton, if he chooses Malignaggi to go after a world title, is picking what many boxing fans see as the weakest link among the four welterweight world champions. You tell me who the weakest champion is among the four current 147 champs:

I don’t think it’s even close. Clearly, Malignaggi is the weakest of the bunch and probably the only one that Hatton has any chance of beating.

« Pacquiao-Marquez: Expect a 5th fight between them in 2013

McCline: Deontay Wilder is the next great; saw him give Wladimir hard work »