Hector Camacho passes away at 50 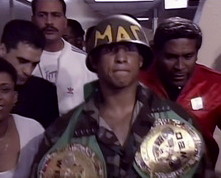 By Eric Thomas: With great sadness boxingnews24.com regrets to inform the readers that former three division world champion Hector “Macho” Camacho passed away on Saturday at the age of 50 after being taken off of life support at the Centro Medico hospital in Puerto Rico.

Camacho had earlier been diagnosed as brain dead following a shooting that occurred last Tuesday night in Puerto Rico that left Camacho’s friend dead and with Camacho having been shot in the face by an unknown gunman. The killer is still at large and the police aren’t saying whether they have any suspects as of yet.

During the 1980s, Camacho was one of the best fighters in boxing as he captured the lightweight and light welterweight titles. He faced the best fighters in the sport and was almost unbeatable. However, Camacho fought well past his prime into the 90s against guys that were much bigger, stronger and younger than him and he struggled.

« McCline: Deontay Wilder is the next great; saw him give Wladimir hard work

Hatton: I’m going to roll back the years »