DeMarco vs. Burns : A good comeback fight for Antonio 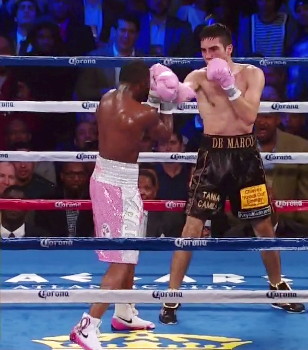 By Scott Gilfoid: Former WBC lightweight champion Antonio DeMarco (28-3-1, 21 KO’s) showed great heart and a good chin in taking ferocious punishment from the talented Adrien Broner (25-0, 21 KO’s) last night in New Jersey. In the end, DeMarco was mowed down in the 8th round after getting hit with 38 of 50 punches thrown by Broner in the round.

There’s no shame in losing to a talent like Broner, because most other top lightweights wouldn’t have made it even to then 8th round. With that said, I’d like to see DeMarco back in the ring fighting for a world title against WBO lightweight champion Ricky Burns (35-2, 10 KO’s) next. DeMarco is too good not to be a world champion and I consider him the 2nd best fighter in the division right now behind Broner.

I know there’s been talk of Broner fighting Burns in a unification match, but that’s not an interesting fight because Burns is still so unproven. Before I’d agree to see Broner potentially face Burns I’d first like to see whether Burns can get past DeMarco. If Burns can beat DeMarco, which I seriously doubt, then I wouldn’t mind seeing Broner waste a fight on Burns.

Apart from that, it’s not worth it for Broner to face a little known fighter like Burns. Golden Boy Promotions needs to build up a Burns vs. Broner fight, and the only way they can do that is by making Burns earn a fight against Broner by having the U.S audiences see how Burns does against a talent like DeMarco.

It would be pointless for Broner to fight Burns now because Burns has been fighting in the UK against little known opposition over there and the casual boxing fans in the U.S don’t have clue one who Burns is and I doubt they would care to see Broner fight him right now.

Like I said, I don’t mind seeing Broner waste a fight on Burns but only if Burns can prove that he deserves a fight against Broner by showing that he can beat DeMarco. My guess is DeMarco would bludgeon the light hitting Burns into submission similar to the way he destroyed Jorge Linares last year. DeMarco has too much power and against a guy that he can land his shots against like Burns, it’ll be a short night for DeMarco.