Dirrell to Abraham: I want your WBO belt! 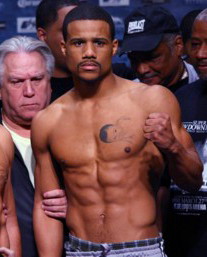 By Scott Gilfoid: The talented super middleweight Andre Dirrell (20-1, 14 KO’s) took the opportunity to sound off on the news of his previous victim Arthur Abraham (35-3, 27 KO’s) defeating WBO super middleweight champion Robert Stieglitz (42-3, 23 KO’s) by a 12 round unanimous decision tonight in Berlin, Germany.

Dirrell immediately got onto his twitter account, saying “I want that WBO [belt], Abraham!!!. Scene 2, Act 2: I’m gonna act out on another ass whopping on you, again.”

Dirrell totally dominated Abraham in April 2010, whipping him like he was a school through most of the fight until Abraham fouled Dirrell after he had slipped on the canvas in the 11th round. Abraham looked down on Dirrell, who was sitting on the canvas after having slipped on some water, and then tagged Dirrell with a tremendous right hand while he was defenseless.

Needless to say, Abraham was immediately ejected from the fight and disqualified by referee Lawrence Cole for the pointless foul. In the meantime, Dirrell needed months of healing to recover from the head shot that Abraham hit him with while he was on the canvas. Thankfully, Dirrell is 100 percent okay now, and he wants to badly avenge that fouling by continuing as he was previous to that by whipping Abraham some more.

I wish Abraham would agree to fight Dirrell again because it would be excellent to see the two of them go at it again so that Dirrell could pitch another shutout like he had going last time he fought Abraham. Unfortunately, I think Dirrell is probably the last fighter that Abraham will want to get in the ring with at this point. Abraham won’t want to fight someone that is going to make him miss all night long and look bad like Dirrell was making him look.

Abraham will make sure that he fights someone stationary that will be there for him when he lands his shots. Dirrell “The Matrix” would be damn near invisible for Abraham if they fought, and he’d only end up looking bad again and possibly resorting to fouling in order to stop schooling.