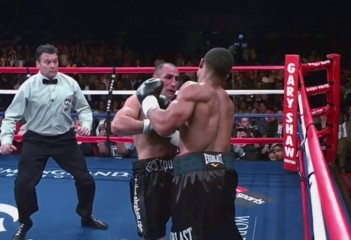 By Allan Fox: Arthur Abraham (34-3, 27 KO’s) goes into his August 25th fight against WBO super middleweight champion Robert Stieglitz (42-2, 23 KO’s) with a considerable power advantage in their fight at the O2 World Arena in Berlin, Germany. Whether the power will be enough for the 32-year-old Abraham is the important question.

Abraham’s stamina is still a major liability for him, as he’s not improved in that department despite moving up in weight from the middleweight division where he previously held the IBF title from 2005 to 2009. During his last year as the IBF champ, his stamina really turned south on him with him unable to fight hard for more than 20 seconds of every round.

Abraham became really limited by then and utterly predictable with the way that he would come alive when the round was nearing the end. Luckily for him, his promoters matched him up against nothing but soft opposition during this time so he was able to hold onto his belt. After Abraham moved up in weight to the 168 pound division, he felt that his stamina would be better because he wouldn’t have to take off so much weight in order to make weight.

However, Abraham has looked just as tired and limited as he was when he was fighting at 160. He’s lost three out of the seven fights he’s had at this weight and was beaten by the only three good opponents he faced. For this reason it’s hard to tell how Abraham will do against Stieglitz because he’s done so poorly each time he faced a good fighter at this weight. The issue here is whether Stieglitz is a good fighter.

It’s impossible to know because his German handlers have kept him away from the truly good fighters in the super middleweight division and aimed him at softer Euro level opponents. As such, we don’t know if Stieglitz is any better than he showed when he was stopped in the 8th round by Librado Andrade in March 2008.

Stieglitz does have the better boxing skills compared to Abraham, and that’s not saying much. Abraham is pretty limited and crude in the ring. Just about any halfway decent fighter is going to have better skills than Abraham. But it might not matter because Abraham’s power is more than good enough to make up for his skills disadvantage if he can connect with some big shots often enough. Abraham hits hard enough to end a fight with a single shot, but he most bludgeons his opponents into submission over the course of his fights.