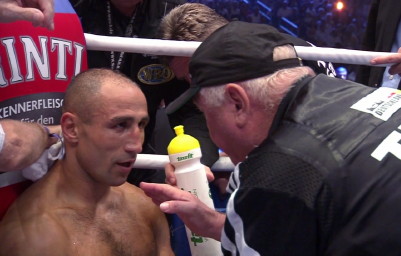 You can perhaps make an argument that the scores should have been a little closer than that, because Stieglitz threw a lot of punches and fought well enough to be almost even at the end of the fight. I didn’t see it as a case where Abraham won the fight by four rounds. That’s a bit too much in his favor.

Stieglitz landed a lot of shots in the first four rounds of the fight with Abraham starting slowly like he usually does. However, once Abraham was properly warmed up and letting his hands go, he was landing a lot of huge punches that Stieglitz, to his credit, took without getting hurt. In the later part of the fight a lot of Stieglitz’s shots were blocked on the arms of Abraham, who was fighting with his customary high guard.

Abraham seemed to fade in the last three rounds and I had Stieglitz winning the last three, which was why I didn’t understand how Abraham could have won the fight by four rounds. It didn’t quite make sense when you look at how well Stieglitz fought at the start of the fight in the first four rounds. It doesn’t add up for me. I think Abraham won the fight, but I felt it was very close.

« Can Pacquiao beat Cotto without a catchweight handicap?

Abraham in position to get big fights against Bute, Oosthuizen and Groves »