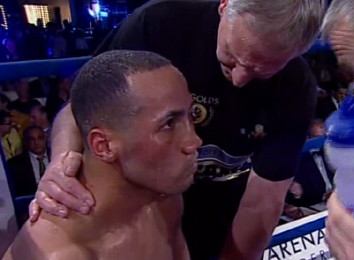 Warren told Westlondonsport.com “He [DeGale] needs to pull his finger out. He’s had some good fight offers. Kelly Pavlik, if James keeps himself well, is one of those fights I think you could look at although there’s some traveling involved.”

DeGale’s career seems to be running backwards since he lost to George Groves by a close 12 round majority decision in May of last year. DeGale has won his last two fights since then, beating Piotr Wilczewski and Cristian Sanavia, but those fighters are clearly a step backwards for DeGale. He probably should toss the EBU title, which is more of an anchor dragging him down to the bottom rather than letting him move freely towards the top of the division.

At 26, DeGale doesn’t need to be tied down by a lesser strap that forces him to defend against 2nd tier fighters over and over again. DeGale needs to fight guys like Pavlik, Sakia Bika or one of the Dirrel brothers if he can get those fights. If not, he needs to face the best contenders he can at the world stage rather than facing little known C level opponents that won’t help him progress as a fighter. Ranked #6 WBC, #7 WBO, DeGale is ranked high enough to where he can get a title shot in the near future if he plays his cards right. He just needs one good win to push him to the #1 spot in the rankings, but he’s not going to get there wasting time against guys like Sanavia. He needs to take on someone like Pavlik and then look to get a title shot after that. Pavlik is a winnable fight for DeGale.

Burns-Mitchell winner may have to face Broner »