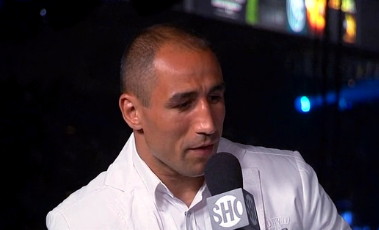 The 32-year-old Abraham’s career was pretty much considered dead after he failed miserably in competing against the best super middleweights in the world in the Super Six tournament between 2009 and 2011, losing three out of the four fights he took part in. Abraham has moved forward and with the help of beatable less than stellar opposition, Abraham is now getting a shot against the super middleweight champion that many boxing fans see as by far the weakest of the champions in 31-year-old Stieglitz.

If Abraham can’t beat Stieglitz then he’s going to have to make a decision about whether retiring or trying to move back down to the 160 pound division. At 5’9″, Abraham doesn’t have size to move up to light heavyweight. He could try to do it, but I think his chances would be pretty poor against the likes of Chad Dawson, Nathan Clevery, Beibut Shumenov and Tavoris Cloud. One thing is for sure that Abraham will have to leave the super middleweight division if he loses to Stieglitz because it’s a waste of time for Abraham to try and face Carl Froch and Andre Ward again, both of whom easily beat Abraham in the Super Six tournament.

The good news for Abraham is that he has a very good chance of beating Stieglitz next month. Stieglitz doesn’t have much power and he’s been blown out by guys like Librado Andrade in the past. Abraham is probably better than Andrade. How much better is still unclear. He can beat the weaker fighters at super middleweight, and the only question is whether Stieglitz is weak enough for Abraham to win.

Adonis Stevenson vs. Don George likely to be rescheduled for late August or early September »