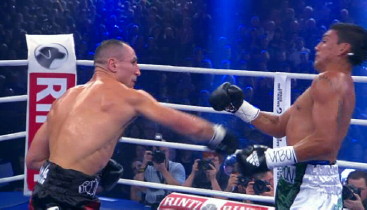 By Allan Fox: Arthur Abraham (34-3, 27 KO’s), with help from his promoters, has done a good job of resurrecting his sinking career by winning his last two fights and will now be fighting for the WBO super middleweight title against champion Robert Stieglitz (42-2, 23 KO’s) next month on August 25th at the O2 World Arena in Berlin, Germany.

Abraham, 32, was pretty much on the brink of being an after thought in losing three of four fights in the Super Six tournament between 2009 and 2011. It was a bad mistake for the 5’9″ Abraham to take part in the tournament because he didn’t have the size, boxing skills or the work rate to beat the better fighters.

We’d seen Abraham struggling at middleweight in his last year as the IBF middleweight champion where he could only put out any real effort for 15 to 20 seconds near the ends of each round. Abraham blamed that on him having to boil down in weight to make the 160 pound limit.

However, when he moved up in weight and competed in the Super Six tournament in 2009, Abraham showed the same problems with his inability to fight hard for three minutes of every round. It cost him big time in losses to Andre Dirrell, Carl Froch and Andre Ward. But Abraham has fixed his career after beating Piotr Wilczewski and Pabli Natalio Farias, and here he is ready to take on Stieglitz next month in Germany for the title.

Stieglitz, 5’11”, doesn’t have the size, reach, speed or the boxing ability of most of the guys that Abraham fought in the Super Six. He won’t be able to stand on the outside and dominate Abraham the way that Dirrell, Froch and Ward did. But he can outbox him if he’s careful not to get hit with too many of Abraham’s last second flurries.

Abraham still fights in the same identical manner that he did in his last year at middleweight and in the Super Six tournament, so that gives Stieglitz a good chance of winning. He knows what Abraham is going to do because he’s so predicable at this point in his career.