Amar vs. Purdy and Frampton vs. Ankrah on Brook-Hatton undercard on Saturday 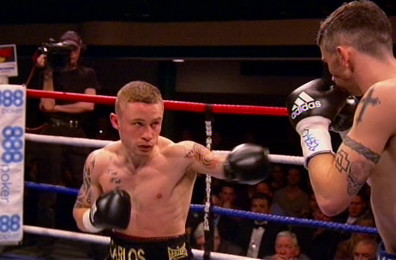 By Scott Gilfoid: This Saturday’s card from the Motorpoint Arena, Sheffield, Yorkshire, UK, will be sporting a couple of nice little mismatches on the undercard of the Kell Brook vs. Matthew Hatton card. Adnan Amar (25-1, 7 KO’s) will be fighting 24-year-old former British welterweight champion Lee Purdy (16-3-1, 9 KO’s) in a 12 round bout for the vacant English welterweight title.

Look for the 29-year-old Amar to trounce Purdy, who is coming off of a loss to Colin Lynes last November in a 12 round majority decision defeat. I like Amar’s skills, but he’s lacking big time in the power department. But it won’t matter for this one, because Purdy is also light on the punching power but doesn’t have Amar’s skills.

Also on the card is Commonwealth super bantamweight champion Carl Frampton (12-0, 8 KO’s) defending his title against a fighter named Prosper Ankrah (18-2, 13 KO’s). I must confess, I’ve never seen Ankrah in my life and not sure where he was found for this fight. But suffice it to say, it looks like another soft matchmaking job for Frampton and I’m looking forward to the day int he future when Frampton finally faces someone good.

I’d like to see Frampton step up to world class for a couple of fights to get his feet wet against the likes of Rendall Munroe, Steve Molitor, Neomar Cermeno, and Rico Ramos to see how he’d do. If he got spanked, he could always go back to defending his Commonwealth title against the little known guys they’re digging up for him. But I would like to see Frampton face at least one halfway decent world class contender before he hangs it up one of these days.

Also on the card will be Grzegorz Proksa vs. Kerry Hope in a mismatch at middleweight, John Ryder vs. Alastair Warren in middleweight action.

« Hearn wants Groves stripped of British title by the BBBofC, so that Anderson can fight for it

Teon Kennedy vs. Guillermo Rigondeaux possible for Pacquiao-Bradley undercard on 6/9 »