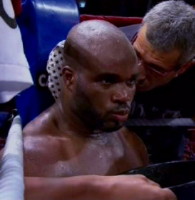 By Jason Kim: 39-year-old challenge Jean Marc Mormeck (36-4, 22 KO’s) has a really tough task ahead of him on March 3rd against IBF/WBA/WBO heavyweight champion Wladimir Klitschko (56-3, 49 KO’s). Mormeck, 5’11”, has more than enough power and speed to knock Wladimir out if he can land his payload right hand and left hooks.

But Mormeck’s problem will be how to land those shots on a consistent enough bases to increase his chances for pulling off an upset knockout win. It’s seems clear that Mormeck won’t be able to win a decision over Wladimir because the fight will be taking place at the ESPRIT arena, Düsseldorf, Nordrhein-Westfalen, Germany where it’s difficult for visiting fighters to win earn decisions.

But more of a problem than that for Mormeck is his shorter reach. Wladimir will have six inches in reach and 30 pounds in weight over Mormeck and that’s going to make it very tough on the Frenchman to land his big shots.

Mormeck will be forced to take a lot of risks and those risks could prove fatal to him if he’s unable to get Wladimir out of there in the first four rounds. If Mormeck walks into one of Wladimir’s left hooks or fight hands, it may be him that’s getting knocked out instead of Wladimir.

A lot of foolish heavyweights have tried to emulate what Purity did by hanging around and trying to get Wladimir deep into the fights. However, it never works because he softens his opponents up with his jabs and then blasts them out with his big left hook or right hand.

« Is Pacquiao-Bradley a PPV worthy fight?

Mayweather-Cotto a huge fight; Pacquiao-Bradley a huge disappointment for fans »