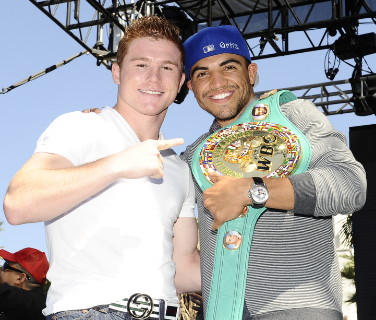 Alvarez, 21, is already within three pounds of the 154 pound limit for the fight with only four days to go to drop the weight. Alvarez looks healthy, and not like someone struggling to make the weight in the last week of the fight. Alvarez’ opponent Gomez is also looking in fine shape.

However, it’s doubtful that he’ll be able to last long against the more powerful, better skilled and younger Alvarez. A lot of boxing fans don’t see Gomez making it past the 4th round in this one. The things that Gomez has going against him is he doesn’t have huge power, and he has problems when facing guys that can punch hard to the body.

Alvarez is an excellent body puncher, and perhaps even better than Miguel Cotto in that department. Against Cotto in 2008, Gomez was knocked down three separate times and totally dominated in a 5th round blowout. The lack of power was the main problem for Gomez in this fight. He didn’t have anything to gain Cotto’s respect with and found himself getting blasted around the ring by a guy that was actually smaller than him.

Alvarez will be bigger than Gomez and much stronger. That’s not a good sign for Gomez. He’s going to have to use movement in this fight because he can’t afford to stand directly in front of Alvarez for long or else he’ll taste the canvas. Alvarez has a killer instinct once he has someone hurt. He really goes after them with nonstop power shots, so hopefully Gomez can stay on his feet and keep from getting hurt in this.

George Foreman: Vitali is as good as any of the past champions »