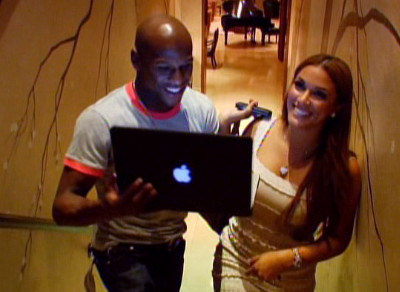 O’Brien only briefly talked about the Ortiz fight, but then got straight to to the point of what really interested in him by asking “So when are you going to be fighting Manny Pacquiao?” Mayweather responded with “Hopefully, if you’re the best, you got to take the test. I represent the red, white and blue. I represent this country, and I just want to be fair and an even playing field. He’s [Pacquiao] from another country. All I ask is he just take the test. Just the test for the urine and blood, which I’m doing for this fight [against Ortiz] and for every fight just to keep up the sport of boxing.”

I fully agree with Mayweather. If Pacquiao will take the test then we can have a fight between him and the best. Pacquiao has got to agree with what Mayweather is asking if he wants to fight him, because isn’t going to go for any of those three week holidays before testing or 24 days in between testing like Pacquiao was asking for during their first failed negotiations last year.

Mayweather wants the full testing now, and none of the partial tests. He also wants Pacquiao to take the USADA testing, and that’s something Pacquiao will have to agree on otherwise we won’t have a fight. Pacquiao’s promoter Bob Arum is talking about Pacquiao being tested by another organization while he’s training in the Philippines. That obviously isn’t going to work out. Pacquiao will have to stay in the U.S and be tested along with Mayweather by the USADA so that it can be something that Mayweather feels good about and trusts. This is the way it has to be if Pacquiao wants to fight the best guy in boxing.