McCloskey-Prescott: You can’t win with defense only 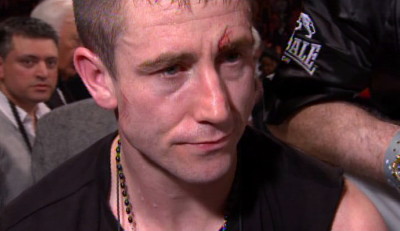 By William Mackay: Paul McCloskey (22-1, 12 KO’s) has some of the best defensive skills in the business. He’s incredibly hard to hit and is good at rolling with the shots that do him. However, that’s about all he can do. He doesn’t possess world class offensive skills and is too one-dimensional. You can win with great offensive skills, but you can’t win with only defensive ability at the world level.

McCloskey faces Breidis Prescott (24-2, 19 KO’s) on September 10th, and he’s a fighter that has very good power and better than average hand speed. Prescott is someone that can chop you down with either hand and he has pretty good jab to go with his powerful left and right hands.

McCloskey took this fight because he wanted to show the boxing world that he has the talent to beat the better fighters in the world. McCloskey didn’t show that in his recent loss to World Boxing Association (WBA) light welterweight champion Amir Khan last April. In that fight Khan made McCloskey look like a guy only able to defend but not attack. That wasn’t just aberration because McCloskey always looks that way. The difference is that before the Khan fight McCloskey had taken on strictly 2nd and 3rd tier opposition his entire career.

Prescott looks improved after losing to Kevin Mitchell and Miguel Vazquez in the past two years. Prescott looked especially sharp in his last fight against Bayan Jargal last April. Although Prescott had to settle for winning by a lopsided 10 round decision against Jargal, he showed amazing power for the entire fight and was still landing very hard in the 10th round. He never lost power or tired, and was jabbing, moving and slugging until the very end.

This is going to make it really hard for McCloskey to win because he can’t sit around for 10 rounds and wait for Prescott to tire because he’s likely to. At the same time McCloskey is going to have to take some chances in this fight if he wants to win it. If he sticks around and does nothing he’s going to be soundly beaten, and likely knocked out.

« Helenius vs. Liakhovich mismatch this Saturday: Look for easy win for Robert