Marquez-Diaz: Marquez looks as good as ever 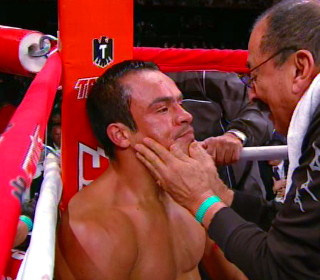 By Peter Wells: Last night Juan Manuel Marquez looked as good as ever in outscoring Juan Diaz in there much anticipated rematch. The younger Juan was brave and fought to the very end but by changing his tactics he preventing himself from taking a beating, just that Marquez was too slick and easily outboxed the Texan. It wasn’t an easy fight by a long stretch and the one judges score of 118-110 did the fight no favours, I scored it 116-112, giving Diaz the 2nd and last 3 rounds. The other judges scored it 116-112 and 117-111.

In the first few rounds it was tight, neither fighter looking better than the other, but you could see from the beginning where the fight was going. Marquez started to land good left hooks, which seemed to replace the uppercut as his Sunday punch last night. Juan was clever to stay out of range, but was not doing enough and was always coming up short.

Marquez started to land shots well and was shaking Diaz up, but never often enough to make the fight look like it was going to be stopped. It was just too little too late for Diaz as he finally took over in the final 3 rounds. Marquez for the first time I’ve seen him look tired. Both fighters ended with the crowd on its feet as they traded toe-to-toe and even after the bell they just didn’t want to stop.

Marquez and Diaz deserve a lot of credit for there performances and both can be proud of what they did. Diaz is unknown whether he still wants to carry on, but Marquez is defiantly got his eyes set on a bright future. Despite talks with Khan, that is not the fight I want to see, I want to see Marquez-Katsidis, two boxers who can scrap it out, what a fight that would be.

Marquez-Diaz Undercard: Upset for Jacobs while Guerrero and Linares cruise to victories »