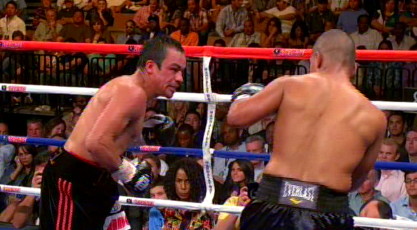 By Jason Kim: Juan Manuel Marquez (51-5-1, 37 KO’s) looked as good as ever on Saturday night, beating challenger Juan Diaz (35-4, 17 KO’s) by a 12 round unanimous decision at the Mandalay Bay Resort and Casino, in Las Vegas, Nevada. Marquez, 36, hurt Diaz a number of times in the fight and was in command the entire way through. Diaz appeared to win only round – the 11th – and spent much of the fight throwing jabs and moving a lot. After the fight, Marquez said “One of the challenges is to move up to 140 [light welterweight] and become the first Mexican fighter in boxing history to win four titles in four divisions.” If Marquez plans on making good on that, he’ll have some tough fighters to pick from.

The current light welterweight champions are Timothy Bradley, Devon Alexander and Amir Khan. Bradley is probably the best out of the bunch, but Alexander is close behind. Khan has the best hand speed, power and size and is also probably the most popular among the three. Khan also fights for the same promotional company as Marquez – Golden Boy Promotions. There’s no doubt that Golden Boy would like to match Marquez with Khan in his next fight, if Marquez is interested in fighting him. Khan would likely be the most beatable of the three because of his fragile chin and would also likely be the best payday for Marquez.

It’s hard to see Marquez beating Alexander and Bradley. Both are very fast and elusive. I think those would be bad match-ups for Marquez. Against Khan, Marquez would have a chance if he can hurt him with a big shot. Marquez would have to be loading up the whole time, because that’s the only way he’d be able to beat a fast guy like Khan. Freddie Roach, Khan’s trainer, would have him moving constantly like he was against Andriy Kotelnik. Khan’s hard to beat when he’s moving.

Marquez also said that he’d like to fight Manny Pacquiao next, saying “My priority has always been Manny Pacquiao. No ifs, and or buts. I want to fight Pacquiao.” The problem is Pacquiao already has a fight planned for November against Antonio Margarito, so he’s not going to be available to fight Marquez next. And beyond that, Pacquiao’s promoter Bob Arum wants to try and match Pacquiao up against Floyd Mayweather Jr. in early 2011. If that fight can be put together, then Pacquiao won’t be available until late next year in September or October. However, Arum also would like to put Pacquiao back in with Miguel Cotto in a rematch. The fight would be taking place at junior middleweight, presumably, if Cotto still has his World Boxing Association junior middleweight title by then.

Since Cotto and Pacquiao both fight for Top Rank, it’s more than likely that Arum will choose to set up the Cotto-Pacquiao rematch rather than put Pacquiao in with Marquez for a third fight between them. Marquez gave Pacquiao huge problems in his two previous fights with him, and would have a good chance of beating Pacquiao. You can’t say the same thing for Cotto, who was totally dominated by Pacquiao last year. Cotto is pretty much a safe fight for Pacquiao, as there’s little danger that Pacquiao will lose the fight, unless Cotto has improved dramatically since the last fight. Boxing fans aren’t too eager to see Pacquiao fight Cotto again, but that fight will probably get made anyway. It’s a fight that is almost guaranteed to bring in between 700,000 to 1 million pay per view buys, and that’s good money for Pacquiao, Cotto and Arum.

Marquez-Diaz: Marquez looks as good as ever »