Froch-Kessler: Will Carl resort to rough stuff if things go badly for him? 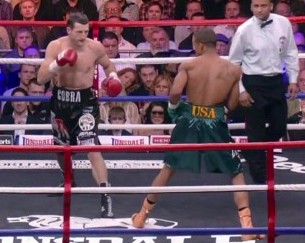 By Scott Gilfoid: Things were going badly for World Boxing Council super middleweight champion Carl Froch (26-0, 20 KO’s) in his last fight against the gifted Andre Dirrell, so bad that after struggling to land anything at all against the mercurial Dirrell, Froch turned the fight physical in the 5th round with a bone jarring body slam of Dirrell. From the 5th round until the 11th, Froch roughed Dirrell repeatedly without any points being taken off by the referee. In a strange twist of fate, it was Dirrell who ended up being the one that had points taken away by the referee for excessive clinching.

Some people are saying that Kessler, 31, is washed up, past his prime because of his poor performance against Ward and his less than win over Gusmyr Perdomo in September. However, I don’t believe it. I think Kessler is still a very capable fighter, more than good enough to box circles around the slow moving Froch. Kessler’s jab, right hand and left hook appear just as good as they ever where in his last fight against Ward.

The reason Kessler was dominated by Ward, of course, was because of how talented Ward is rather than a case of Kessler going downhill as a fighter. I think Kessler is going to far too skilled for Froch to deal with in this fight, and I can see this leading to a great deal of frustration on Froch’s part, probably early on when things start looking ugly for the British fighter.

With the exception of the Dirrell and Taylor fights, Froch hasn’t been made to struggle too much in his fights. He’s mostly had his way against the fodder that was put in with him until he ran into problems against a speed bump in the form of Jermain Taylor in April 2009. After getting rudely dropped to the canvas early in the fight and pounded on for eight rounds, Froch rallied late and stopped Taylor in the 12th round.

Froch struggled even worse against Dirrell, who had Froch looking tied in knots as he plodded around the ring with his stiff looking legs trying to land against Dirrell, “The Matrix.” After Froch began to rough Dirrell up, hammering him in the clinches while holding on and roughing him up, he was able to win some rounds. I personally only gave Froch three rounds with one round even, but two of the judges scored it in Froch’s favor while the third gave it to Dirrell.

But will Froch resort to trying to rough Kessler up if he finds himself getting pulverized by Kessler on April 24th? I think he might. The fight will be held in Herning, Denmark, in front of 10,000 Danish fans, all of which will be cheering loudly for Kessler all night long. Froch can say that he’ll be able to shut this out, but I don’t think he will.

I see Froch coming unglued with all the fan noise, and the constant jabs he’s forced to eat all night long. Once Froch starts taking a real pounding by say the 5th round, I can see him closing the distance quickly and trying to manhandle Kessler like a pretzel. I give Froch credit for being a strong fighter in the clinch. He looked powerful when he was roughing Dirrell up in his last fight.

Froch is probably more than a handful when it comes to wrestling or MMA type fighting, but as far as in the open ring with both fighters throwing punches, Kessler is going to be way too skilled for Froch to deal with. I think Kessler will be ready for Froch’s rough house tactics and will be strong enough on the inside to fight Froch off when he does the holding and hitting and other fouls. I just hope the referee steps in this time and takes points away from Froch if or when he starts fouling.

« Cotto vs. Yuri Foreman on June 5th at Yankee Stadium

Arum: “This fight [Pacquiao-Clottey] is going to be harder the Cotto fight” »